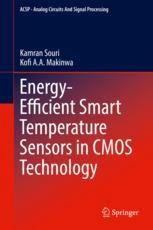 This book describes the design and implementation of energy-efficient smart (digital output) temperature sensors in CMOS technology. To accomplish this, a new readout topology, namely the zoom-ADC, is presented. It combines a coarse SAR-ADC with a fine Sigma-Delta (SD) ADC. The digital result obtained from the coarse ADC is used to set the reference levels of the SD-ADC, thereby zooming its full-scale range into a small region around the input signal. This technique considerably reduces the SD-ADC’s full-scale range, and notably relaxes the number of clock cycles needed for a given resolution, as well as the DC-gain and swing of the loop-filter. Both conversion time and power-efficiency can be improved, which results in a substantial improvement in energy-efficiency. Two BJT-based sensor prototypes based on 1st-order and 2nd-order zoom-ADCs are presented. They both achieve inaccuracies of less than ±0.2°C over the military temperature range (-55°C to 125°C). A prototype capable of sensing temperatures up to 200°C is also presented. As an alternative to BJTs, sensors based on dynamic threshold MOSTs (DTMOSTs) are also presented. It is shown that DTMOSTs are capable of achieving low inaccuracy (±0.4°C over the military temperature range) as well as sub-1V operation, making them well suited for use in modern CMOS processes.

Dr. Souri managed to improve the energy-efficiency of integrated temperature sensors by nearly two orders of magnitude, thus enabling the realization of practical temperature-sensing RFID (Radio Frequency Identification) tags. His work has resulted in one US Patent, many international publications and a number of commercial products. In Feb. 2013, he received the IEEE Solid-State Circuit Society Predoctoral Achievement Award. Dr. Souri has also served as a technical reviewer for the Journal of Solid-State Circuits (JSSC), the Journal of Analog Integrated Circuits and Signal Processing (AICSP), the IEEE Transactions on Circuits and Systems I (TCAS-I), the IEEE International Symposium on Circuits and Systems (ISCAS) and the Journal of Semiconductor Technology and Science (JSTS).

From 1989 to 1999, he was a Research Scientist with Philips Research Laboratories, Eindhoven, The Netherlands, where he worked on interactive displays and digital recording systems. In 1999, he joined Delft University of Technology, where he is currently an Antoni van Leeuwenhoek Professor and Head of the Microelectronics Department. His main research interests are in the design of precision mixed-signal circuits, sigma-delta modulators, smart sensors and sensor interfaces. This has resulted in 12 books, 25 patents and over 200 publications.