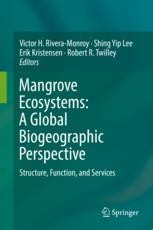 This book presents a comprehensive overview and analysis of mangrove ecological processes, structure, and function at the local, biogeographic, and global scales and how these properties interact to provide key ecosystem services to society. The analysis is based on an international collaborative effort that focuses on regions and countries holding the largest mangrove resources and encompasses the major biogeographic and socio-economic settings of mangrove distribution. Given the economic and ecological importance of mangrove wetlands at the global scale, the chapters aim to integrate ecological and socio-economic perspectives on mangrove function and management using a system-level hierarchical analysis framework. The book explores the nexus between mangrove ecology and the capacity for ecosystem services, with an emphasis on thresholds, multiple stressors, and local conditions that determine this capacity. The interdisciplinary approach and illustrative study cases included in the book will provide valuable resources in data, information, and knowledge about the current status of one of the most productive coastal ecosystem in the world.

Victor H. Rivera-Monroy is associate professor in the Department of Oceanography and Coastal Sciences, College of the Coast and Environment at Louisiana State University. He has performed ecological studies in mangrove-dominated ecosystems for the last 20 years in Latin America, particularly research on biogeochemistry, wetland productivity and restoration issues. Currently he is member of both the Florida Coastal Everglades (FCE) Long Term Ecological Research (LTER) program funded by the US National Science Foundation and the Mexican LTER program.

Shing Yip (Joe) Lee is a professor at the School of Life Sciences and director of the Simon S.F. Li Marine Science Laboratory at The Chinese University of Hong Kong. His work on mangroves is focused on the ecosystem processes of mangroves, particularly the role of key fauna in trophodynamics. He has been working on mangroves in Southeast Asia and Australia since 1985. He was appointed founding co-chair of the

IUCN Specialist Group on Mangroves in 2013.

Erik Kristensen is professor at the Institute of Biology, University of Southern Denmark, Denmark. For over three decades he has traveled to many mangrove areas in Africa, Asia and Australia to do his research. This has been a simple necessity given the lack of mangrove forests in his home country. His research is focused on carbon, sulfur, iron and nitrogen biogeochemistry in mangrove sediments as well as food web dynamics among mangrove benthos.

Robert R. Twilley is professor in the Department of Oceanography and coastal Sciences, College of the Coast and Environment at Louisiana State University. He has performed research in new and old world mangrove ecosystems during the last 25 years, with emphasis on system ecology and biogeochemistry, conceptual and simulation models, coastal ecosystem restoration and nutrient dynamics. He is currently the executive director of the LSU-based Louisiana Sea Grant Col

lege Program at LSU.
Show all