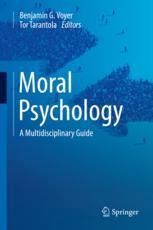 This fascinating and timely volume explores current thinking on vital topics in moral psychology, spanning the diverse disciplines that contribute to the field. Academics from cognitive science, evolutionary biology, anthropology, philosophy, and political science address ongoing and emerging questions aimed at understanding the thought processes and behaviors that underlie our moral codes—and our transgressions. Cross-cutting themes speak to individual, interpersonal, and collective morality in such areas as the development of ethical behavior, responses to violations of rules, moral judgments in the larger discourse, and universal versus specific norms. This wide-angle perspective also highlights the implications of moral psychology research for policy and justice, with cogent viewpoints from:

·         Evolutionary biology: theories of how altruism and moral behavior evolved.

With the goal of providing a truly multidisciplinary forum for moral psychology, this volume is sure to spark conversations across disciplines and advance the field as a whole. Sampling the breadth and depth of an equally expansive and transformative field, Moral Psychology: A Multidisciplinary Guide will find an engaged audience among psychologists, philosophers, evolutionary biologists, anthropologists, political scientists, neuroscientists, lawyers, and policymakers, as well as a more general audience interested in better understanding the complexity of moral psychology research.

Ben Voyer is a behavioural scientist and interdisciplinary researcher, working with innovative quantitative and qualitative research methods to investigate how self-perception and interpersonal relations affect cognition and behaviours in various contexts (consumption, organisational, cross-cultural…). He has authored or co-authored more than 150 scientific contributions to the field of applied psychology (journal articles, conference presentations, case studies...). He is currently L’Oréal Professor of Creativity & Marketing at ESCP Europe Business School, and Visiting Fellow at the London School of Economics & Political Science (LSE) in the UK.

Tor Tarantola completed his PhD in psychology at the University of Cambridge and is currently a JD candidate at Yale Law School. His research focuses on reinforcement learning, social cognition, and their implications for legal theory and practice. He was formerly a fiscal and policy analyst at the non-partisan Legislative Analyst’s Office in California, where he helped advise state lawmakers on criminal justice policy