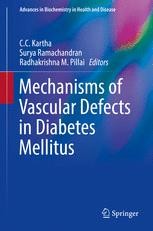 This book intends to bring together, a panel of renowned experts in the field of vascular biology and diabetology, to integrate the current understanding of the pathogenesis and pathophysiology of vascular diseases in diabetes mellitus. This attempt is significant given the increasing interest in this area as the prevalence of vascular diseases continues to escalate globally. Patients with diabetes are at a higher risk of structural and functional changes in all vessel walls of the human body. Vascular complications of diabetes are leading causes for both morbidity and mortality.
In recent years, several articles have focused on advancing our knowledge on the profound effect of hyperglycemia and insulin resistance on building up vascular wall inflammation leading to endothelial dysfunction in patients with diabetes mellitus  Other reports have elaborated on the various disorders, hyperglycemia can lead to, their therapies, adverse effects and complications. There are also studies that highlight the role of factors that induce vascular wall alterations in hyperglycemia.
In this book, we attempt to discuss vascular disease progression in diabetes with a unique approach. We attempt to provide a complete perspective of the pathophysiology of vascular complications and then dissect each of the factors that play a key role in accelerating vascular wall alterations in diabetes. Each of these factors has been adversely implicated in the initiation and progression of disease to a large extent. In this collection for the first time all these factors would be described under a common canopy. Further, the text would emphasize on pathogenesis of micro vascular complications of diabetes, such as retinopathy, neuropathy and nephropathy. Pharmacological therapies for treating vascular dysfunction in diabetes mellitus would also be reviewed. This compendium hopefully would be an invaluable replacement to scores of literature on diabetic vascular disease and would be of great interest to clinicians, academicians, medical students and researchers.
The book will be divided into seven sections, each emphasizing a common incentive to development of vascular disease in diabetes. Section I deals with pathophysiology of diabetic vascular disease, beginning with an update on the global burden of diabetes mellitus and its vascular complications. The pathophysiology and pathogenesis of diabetes associated macrovasculopathy, how hyperglycemia functions as an atherogenic factor, effects of hyperglycemia on smooth muscle accumulation in vascular lesions and genetic susceptibility for increased risk of vascular disease in diabetes will be discussed in the following chapters of this section.
The next section (Section II) surveys the process of endothelial dysfunction under hyperglycaemia and hyperinsulinemia and their effects on angiogenesis, vascular remodeling and wound healing. A chapter is also dedicated to the endothelial progenitor cell population and its dysfunction during development of vascular complications in diabetes.
Section III will highlight the molecular mechanisms underlying endothelial dysfunction, various pathways such as nitric oxide synthase pathway, oxidative stress pathway, renin – angiotensin system and increased vascular superoxide production in the initiation and progression of vascular disease in diabetes. This section also covers role of endothelin, monocyte derived cytokines, peroxynitrate and adipokines in macrovascular complications of diabetes.
Metabolic factors such as advanced glycation end products, atherogenic dyslipoproteinaemia, and homocysteine will be reviewed in Section IV, whereas an overview of the hemostatic factors such as platelet dysfunction, hyperglycaemia induced thrombin formation and aberrant clot lysis will be dwelled upon in Section V.Section VI includes chapters on microvascular complications of diabetes which encompasses long term complications of diabetes affecting small blood vessels of the eye, kidneys and nervous system. The pathogenesis and mechanisms of these complications would be detailed here.
The final section (Section VII) of the book will consider mechanism of action of drugs for treating endothelial dysfunction in diabetes mellitus which would elaborate on lipid regulating therapies such as statins, as well as other therapies such as ACE inhibitors, Angiotensin II receptors, insulin, metformin and their effects on enhancing vascular function in diabetes.<We intend to invite authors who symbolize a multidisciplinary approach to this complicated disease. The proposed authors include clinicians who understand the trend of vascular complications in their long term clientele, epidemiologists with a holistic view, basic and experimental researchers with years of experience in dissecting the factors leading to endothelial dysfunction and clinical researchers with the skill of translating bench work to the bedside. We expect this book will be of significant value and interest to the same group of clinicians, researchers, post doctoral fellows and medical and non medical graduate students. The novel assimilated insights could stimulate development of mechanism based prevention and therapeutic strategies providing a promising option to limit cardiovascular complications in diabetes mellitus.