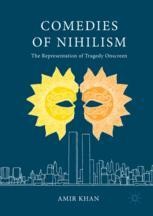 The Representation of Tragedy Onscreen

This book presents close-readings of seven post-millennial comedic films: Up in the Air, Tropic Thunder, JCVD, Winnebago Man, The Trotsky, Be Kind Rewind, and Hamlet 2. It is a sequel to Stanley Cavell’s 1981 landmark study of the comedic genre, Pursuits of Happiness, where he examines seven comedies of Hollywood’s “Golden Age.” Khan puts forward the idea that comedies, once centred on the conventional “happy ending,” are no longer interested in detailing the steps to any ending we might call happy. Instead, the agenda of most culturally serious comedies today is to “spoof,” to make all that is fair foul. The seven films presented here risk a type of cultural nihilism—spoofing for the sake of spoofing and nothing else, indicative not of film’s promise but its failure.

By equating the failure of film with the failed national politics of Canada (or the failed politics of nationalism and community more generally), this study shows that comedy has less to do with happiness and more to do with the grotesque. The films analysed represent hyper-realized forms of comic irony and move towards what theatre knows as tragedy, or a tragic vision.

Amir Khan is Xinghai Associate Professor of English in the School of Foreign Languages at Dalian Maritime University. His books include Comedies of Nihilism (2017) and Shakespeare in Hindsight (2016). He is managing editor of Conversations: The Journal of Cavellian Studies. He lives and works in China.

“Amir Khan’s eloquent voice and discerning mind take his reader on an exhilarating and provocative journey through seven post-9/11 films. Following the sage guidance of Stanley Cavell, Khan invites us to engage in clear-eyed and instructive discussions about film and moral reasoning, which thoughtful moviegoers will gratefully enjoy. Khan’s book will generously reward contemporary American efforts to accurately descry the True North, and it will provide fresh insight into American self-understanding as Canada’s imperial movie-making neighbor to the south.” (Lawrence F. Rhu, Professor Emeritus of English Language and Literature at the University of South Carolina, USA)

“A beautifully written book that is both insightful and necessary. It offers a set of attentive readings of contemporary popular comedies articulated as philosophical as well as cultural film criticism. It also proposes a new theoretical genre and rediscovers the critic’s vital task of thinking through present-day tragic nihilism by engaging with and reflecting on the popular art of this time.” (Sérgio Dias Branco, Professor of Film Studies, University of Coimbra, Portugal)

“Amir Khan’s important book explores whether film comedy’s potential for social and political regeneration still holds in a world of shifting transnational alliances. Through attentive analysis of a number of films, Comedies of Nihilism considers the viability of national cinematic cultures in a period of globalisation, and asks what we still have a right to expect film to do for us.” (Andrew Taylor, Senior Lecturer in English Literature, University of Edinburgh, UK)