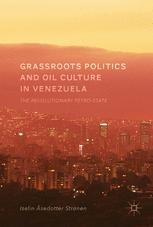 This book is published open access under a CC BY 4.0 license.
This book presents an ethnographic study of how grassroots activism in Venezuela during the Chávez presidency can be understood in relation to the country's history as a petro-state. Taking the contested relationship between the popular sectors and the Venezuelan state as a point of departure, Iselin Åsedotter Strønen explores how notions such as class, race, state, bureaucracy, popular politics, capitalism, neoliberalism, consumption, oil wealth, and corruption gained salience in the Bolivarian process. A central argument is that the Bolivarian process was an attempt to challenge the practices, ideas, and values inherited from Venezuela's historical development as an oil-producing state. Drawing on rich ethnographic material from Caracas' shantytowns, state institutions, as well as everyday life and public culture, Strønen explores the complexities and challenges in fostering deep social and political change.

Iselin Åsedotter Strønen is Associate Professor of Social Anthropology at the University of Bergen, Norway, and Affiliated Researcher at the Chr. Michelsen Institute (CMI), Norway.

“Strønen’s rich ethnography is a compelling exploration of social and political change in Venezuela under President Hugo Chávez, seen from the point of view of residents of the poor urban barrios. Chávez’s Bolivarian project promised radical transformations of the state, recognizing a social debt to the poor who were marginalized during previous regimes. Strønen shows how the resulting reforms brought enormous changes for the poor, privileging ‘popular power’ and ‘local sovereignty,’ but emphasizes that these transformations were mediated by the legacies of the rentier petro-state (including consumerism and corruption). Refusing to take sides between those who see Venezuela as an exceptional case of either authoritarianism or revolutionary politics, Strønen finds a theoretically complex middle ground focusing on what she calls the ‘Bolivarian space’—the ambiguous space where state power and popular power converge and in which political agency is articulated.” (Nancy Postero, Associate Professor of Anthropology, University of California, San Diego, USA)

“Strønen’s vivid ethnography and penetrating analysis of ‘the Bolivarian Space’ significantly advances understanding of what Hugo Chávez’s efforts to transform Venezuela meant to racially stigmatised popular classes. Offering new perspectives on grassroots agency and the complicated relationships between disadvantaged citizens, activists and a ‘pro-poor’ government, and providing an innovative approach to the Venezuelan petro-state, seen from below, her diagnosis of the successes and failures of this period remains relevant not just to Venezuela but to the whole of Latin America today.” (John Gledhill, Emeritus Professor of Social Anthropology, The University of Manchester, UK)

“With rich ethnographic detail, Iselin Åsedotter Strønen makes a vital contribution to understanding the Bolivarian revolutionary process in the Chávez era. She captures the frustration, hope, and hard work that characterized barrio-based organizing. Strønen uncovers how histories of exclusion and aspirations for access to Venezuela’s oil wealth continue to shape moral economies, at times in expected ways. Grassroots Politics and Oil Culture in Venezuela is a necessary rejoinder to one-dimensional portrayals of the Bolivarian movement. ” (Naomi Schiller, Assistant Professor of Anthropology and Archaeology, Brooklyn College, CUNY, USA)