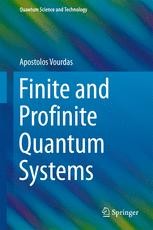 This monograph provides an introduction to finite quantum systems, a field at the interface between quantum information and number theory, with applications in quantum computation and condensed matter physics.

The first major part of this monograph studies the so-called `qubits' and `qudits', systems with periodic finite lattice as position space. It also discusses the so-called mutually unbiased bases, which have applications in quantum information and quantum cryptography. Quantum logic and its applications to quantum gates is also studied.

The second part studies finite quantum systems, where the position takes values in a Galois field. This combines quantum mechanics with Galois theory. The third part extends the discussion to quantum systems with variables in profinite groups, considering the limit where the dimension of the system becomes very large. It uses the concepts of inverse and direct limit and studies quantum mechanics on p-adic numbers.

Applications of the formalism include quantum optics and quantum computing, two-dimensional electron systems in magnetic fields and the magnetic translation group, the quantum Hall effect, other areas in condensed matter physics, and Fast Fourier Transforms.

The monograph combines ideas from quantum mechanics with discrete mathematics, algebra, and number theory. It is suitable for graduate students and researchers in quantum physics, mathematics and computer science.
Show all
About the authors

Apostolos Vourdas is a Professor of Computing at the University of Bradford, UK, with research interests spanning various aspects of quantum computing (analytic functions in quantum physics; algebraic and group theory methods; finite quantum systems; Galois fields and p-adic numbers in quantum computing; quantum logic and lattice theory).  He has published over 160 refereed journal papers and 8 invited review articles, and has an h-index of 34.

“This book is a fundamental read for anyone working on quantum technologies … . the book provides for an important reference for both graduate students and researchers working on either finite and profinite quantum systems, specifically, or in quantum technology research. Due to the extensive results and propositions’ proofs provided, the book can be used as a reference for building new approaches integrating the theory of finite and profinite quantum system.” (Carlos Pedro Gonçalves, zbMATH 1379.81004, 2018)