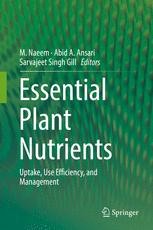 Uptake, Use Efficiency, and Management

This book explores the agricultural, commercial, and ecological future of plants in relation to mineral nutrition. It covers various topics regarding the role and importance of mineral nutrition in plants including essentiality, availability, applications, as well as their management and control strategies. Plants and plant products are increasingly important sources for the production of energy, biofuels, and biopolymers in order to replace the use of fossil fuels. The maximum genetic potential of plants can be realized successfully with a balanced mineral nutrients supply. This book explores efficient nutrient management strategies that tackle the over and under use of nutrients, check different kinds of losses from the system, and improve use efficiency of the plants. Applied and basic aspects of ecophysiology, biochemistry, and biotechnology have been adequately incorporated including pharmaceuticals and nutraceuticals, agronomical, breeding and plant protection parameters, propagation and nutrients managements. This book will serve not only as an excellent reference material but also as a practical guide for readers, cultivators, students, botanists, entrepreneurs, and farmers.

Dr. M. Naeem is an Assistant Professor in the Department of Botany at Aligarh Muslim University, India. For more than a decade, he has devoted his research to improving the yield and quality of commercially important medicinal and aromatic plants (MAPs). His research focuses on escalating the production of MAPs and their active principles using a novel and safe technique involving radiation-processed polysaccharides as well as the application of potent PGRs. To date, he has successfully run three major research projects as the Principal Investigator, two of which were sanctioned by the Department of Science & Technology, New Delhi. He also completed another fascinating research project on Catharanthus roseus awarded by CSTUP, Lucknow. Dr. Naeem has published more than 80 research papers in reputable national and international journals as well as six books. He has also participated in various national and international conferences and acquired life membership

Dr. Abid A. Ansari is an Assistant Professor in the Department of Biology, Faculty of Science, University of Tabuk, Saudi Arabia. Dr. Ansari’s research work is concerned with phytoremediation and eutrophication. Dr. Ansari has to his credit a number of research articles of national and international repute, 10 edited books and a number of book chapters on varied aspects of his resea

rch. He has been awarded Scientist of the Year 2014 & Environmentalist of the Year 2011 by National Environmental Science Academy, India and Research Excellence 2016 by University of Tabuk. He has also participated in various national and international conferences and acquired memberships to various scientific bodies (Saudi Biological Society, International Phytotechnology Society, Society for Ecological Restoration).

iotechnology (ICGEB), New Delhi, he worked on plant helicases and discovered a novel function of plant MCM6, PDH45 and p68 in salinity stress tolerance that will help improve crop production at sub-optimal conditions. A recipient of the Junior Scientist of the Year Award 2008 from the National Environmental Science Academy, Dr. Gill has edited several books and has a number of research papers, review articles, and book chapters to his name.​
Show all