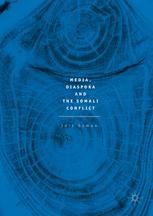 Media, Diaspora and the Somali Conflict

This book illustrates how diasporic media can re-create conflict by transporting conflict dynamics and manifesting them back in to diaspora communities. Media, Diaspora and Conflict demonstrates a previously overlooked complexity in diasporic media by using the Somali conflict as a case study to indicate how the media explores conflict in respective homelands, in addition to revealing its participatory role in transnationalising conflicts. By illustrating the familiar narratives associated with diasporic media and utilising a combination of Somali websites and television, focus groups with diaspora community members and interviews with journalists and producers, the potentials and restrictions of diasporic media and how it relates to homelands in conflict are explored.

Idil Osman is a Research Associate and Senior Teaching Fellow in the Department of Development Studies at SOAS, University of London.

“Idil Osman’s book … is a highly interesting contribution to journalism and diaspora studies, especially with its focus on conflict re-creation and diasporic media. … It is well written and highly informative; the chapters flow well and complement each other. More importantly, it presents original data to an audience of academics and non-academics who want to learn more about the Somali conflict and the Somali diaspora. … this book makes an original contribution to the field.” (Bahar Baser, Ethnic and Racial Studies, Vol. 40, November, 2017)

“The powerful role of the Somali media in inciting, inflaming and perpetuating conflict is a vexed and often neglected subject. Idil Osman tackles it head on, with rigour, courage and humanity. She examines the influential and often destructive part played by diaspora media, but also explores how the explosion of Somali media outlets has given limited space to marginalised groups and has the potential, at least, to open avenues for a more constructive sharing of ideas and information. The book is an valuable contribution to Somali studies.” (Mary Harper, Africa Editor, BBC News and author of Getting Somalia Wrong? Faith, War and Hope in a Shattered State)

“Idil Osman examines the role of Somali diaspora media in maintaining the link between those who have been displaced to the far corners of the world by 25 years of war and state failure in Somalia and those who remain or who return there. Her account is striking for both its hard-hitting analysis and its gentle compassion. The author has been a participant observer in diaspora media for more than a decade. She uses her experience as a journalist and scholar to shine a light on her own community through displacement, conflict, and political reconstruction. The result is a fantastically well-informed analysis that never forgets that it is concerned with real lives and real stories about people who, despite having suffered greatly, are above all resilient and creative.” (Dr Laura Hammond, School of Oriental and African Studies, UK)

“This book systematically examines the role of media and diaspora in the context of conflict. Surpassing the limits of previous studies on media and diaspora, the book goes beyond diaspora’s identity maintenance and examines how transnational media become involved in conflict – both in reinforcing tensions and in advancing peace initiatives. By focussing on the Somali diaspora and its media space, the author offers a multidimensional and provocative analysis of the troubled and promising space of diaspora and transnational communication.” (Myria Georgiou, London School of Economics and Political Science, UK)

“This book offers important insights into the complex, fluid, and often contested relationships between diasporic populations, homeland ‘remainees’ and external networks. Their use of and access to diverse forms of media play a key role in shaping the societies that are central to those networks. The Somali case is both apposite for such a study, while also offering rich and contextually specific material in its own right. Idil Osman’s exploration of these themes provides a welcome addition to an area of increasing interest to academics and policy-makers alike.” (Dr Michael Walls,   Co-Director of MSc Development Administration and Planning, Senior Lecturer, UCL, UK)