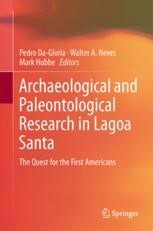 The Quest for the First Americans

This groundbreaking volume presents, for the first time in English, a broad historical review of the researches carried out over 170 years in the region of Lagoa Santa, Brazil, one of the most important archaeological regions in the Americas. From the pioneering work of the Danish naturalist Peter Lund in the XIX century to the recent research on the dispersion of early humans across South America, led by Walter A. Neves and colleagues, Lagoa Santa has offered remarkable findings, the largest collections of early human skeletons in the Americas, and has contributed to the overall discussions about the settlement of the Americas.

This edited volume aims to fill the lack of publications in English about Lagoa Santa and gathers representatives of all the main Brazilian institutions directly involved in the archaeological and paleontological investigations in the region, in order to provide the international scientific community a comprehensive and complete account of the researches that contributed to rewrite the history of the peopling of the Americas. The book is organized in two parts. The first consists of chapters describing each of the interventions in the region, beginning with the pioneering work of Peter Lund and culminating with the latest intervention led by Walter A. Neves and his team. The second part of the book consists of reviews of current relevant research foci in the region, such as migrations, health, mortuary rituals, paleontology, rock art and technology.
Show all
About the authors

Pedro Da-Gloria holds a Ph.D. in anthropology from The Ohio State University and is a researcher of the Laboratory for Human Evolutionary and Ecological Studies at the Biosciences Institute of the University of São Paulo (IB-USP). His main research focus is on the study of health and lifestyle of the early hunter-gatherers from Lagoa Santa. He also is involved in a project about the bioarchaeology of past human populations from Northern Chile, and is leading a project with rural populations from the Amazon, dedicated to create health models to be applied in living and past populations.

Walter A. Neves is full professor at the Biosciences Institute of the University of São Paulo (IB-USP), where he coordinates the Laboratory for Human Evolutionary and Ecological Studies in the Department of Genetics and Evolutionary Biology, which was the first laboratory dedicated to the study of biological anthropology in Latin America. He holds a Ph.D. in evolutionary biology from the IB-USP with post-doctoral studies at the Northwestern University, USA, and at the Department of Anthropology of the Faculty of Philosophy, Languages and Literature and Human Sciences of the University of São Paulo. Throughout his career he has contributed with many research groups in Brazil, United States, Argentina and Chile, and has developed a vast and prolific academic career in the areas of biological anthropology, prehistoric archaeology, human evolution, human ecology, and evolutionary theory. His main research focus is on the Settlement of the Americas, with a special emphasis on the study of Lagoa Santa Early Holocene hunter-gatherers. He has published over 120 articles, 12 books, 22 book chapters, and advised 20 master and 7 Ph.D. students.

Mark Hubbe is an associate professor at the Department of Anthropology of The Ohio State University. He received his degree in biological anthropology from the University of São Paulo in 2006 and has focused most of his research efforts in the study of the biological characteristics of early South American human populations. Since 2000, he participates as co-investigator of the long-term project led by Prof. Walter A. Neves to excavate new sites in the Lagoa Santa region, in Central Brazil. His research focus has been the study of morphological affinities, processes of morphological adaptation, and modern human dispersion. Most recently, he has been applying quantitative analyses to processes of morphological differentiation and modern human dispersion across the planet.

“This volume brings together 16 chapters by 23 mainly Brazilian scholars who discuss historical and current research on the region. … The implications for inferring the ancestry of modern Native Americans from these skeletons are discussed in several chapters. Summing Up: Recommended. General collections, and upper-division undergraduates and above.” (E. Delson, Choice, Vol. 55 (5), January, 2018)