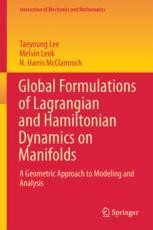 Global Formulations of Lagrangian and Hamiltonian Dynamics on Manifolds

A Geometric Approach to Modeling and Analysis

This book provides an accessible introduction to the variational formulation of Lagrangian and Hamiltonian mechanics, with a novel emphasis on global descriptions of the dynamics, which is a significant conceptual departure from more traditional approaches based on the use of local coordinates on the configuration manifold. In particular, we introduce a general methodology for obtaining globally valid equations of motion on configuration manifolds that are Lie groups, homogeneous spaces, and embedded manifolds, thereby avoiding the difficulties associated with coordinate singularities.

The material is presented in an approachable fashion by considering concrete configuration manifolds of increasing complexity, which then motivates and naturally leads to the more general formulation that follows. Understanding of the material is enhanced by numerous in-depth examples throughout the book, culminating in non-trivial applications involving multi-body systems.

This book is written for a general audience of mathematicians, engineers, and physicists with a basic knowledge of mechanics. Some basic background in differential geometry is helpful, but not essential, as the relevant concepts are introduced in the book, thereby making the material accessible to a broad audience, and suitable for either self-study or as the basis for a graduate course in applied mathematics, engineering, or physics.

“This book presents a monograph on foundational geometric principles of Lagrangian and Hamiltonian dynamics and their application in studying important physical systems. … Throughout the book numerous examples of Lagrangian and Hamiltonian systems are included … . It is very clearly written and it will be especially useful both for beginning researchers and for graduate students in applied mathematics, physics, or engineering.” ( M. Eugenia Rosado María, Mathematical Reviews, May, 2018)

“The starting point of this impressive textbook is the important fact that there are remarkable situations where the variables that describe a dynamical system do not lie in a vector space (i.e., a simple at algebraic structure) but rather lie in a geometrical setting allowing the differential calculus, namely a differential manifold. … In conclusion, this book is extremely useful for each reader who wishes to develop a modern knowledge of analytical mechanics.” (Mircea Crâşmăreanu, zbMATH 1381.70005, 2018)

“This well-written and expansive book is ambitious in its scope in that it aims at sound and thorough pedagogy as far as its subject matter is concerned, and it also aims at preparing the reader for computational work … . There are many good examples accompanying or even guiding the text, as well as extensive problem sets for the properly serious student. This book … prove very valuable to its readership, be they mathematicians, engineers, or physicists.” (Michael Berg, MAA Reviews, November, 2017)