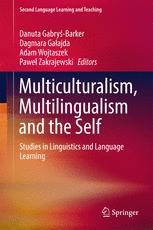 Multiculturalism, Multilingualism and the Self

Studies in Linguistics and Language Learning

Today’s world is an increasingly complex network of cross-cultural and multilingual influences, forcing us to redefine our Selves to include a much broader perspective than ever before. The first part of the book explores attitudes toward multiculturalism in British political speeches, joking behaviour in multicultural working settings, culture-dependent aspects of taboos and swearing, and expressive language of the imprisoned, adding a diachronic perspective by means of a linguistic study of The Canterbury Tales. In turn, the studies in the second part focus on visible shifts in contemporary multilingualism research, learners’ attitudes towards multiple languages they acquire, teachers’ perspectives on the changing requirements related to multiculturalism, and immigrant brokers’ professional experience in the UK.

Danuta Gabryś-Barker is a Professor of English at the University of Silesia, Katowice, Poland, where she lectures and supervises M.A. and Ph.D. theses in applied linguistics, psycholinguistics, and especially in second language acquisition and multilingualism. She has published approximately one hundred and fifty articles and the books Aspects of multilingual storage, processing and retrieval (2005) and Reflectivity in pre-service teacher education (2012). She has also edited eleven volumes, among others for Multilingual Matters, Springer and the University of Silesia Press. Prof Gabryś-Barker has been the editor-in-chief of the International Journal of Multilingualism (Taylor & Francis/Routledge) since 2010 (with Prof Eva Vetter) and the co-founder and editor-in-chief of the journal Theory and Practice of Second Language Acquisition (University of Silesia Press) since 2015 (with Prof Adam Wojtaszek). She is also one of the main organizers of the annual international SLA conference held in Szczyrk, Poland, a major academic event of international prominence.

Dagmara Gałajda received her Ph.D. degree in linguistics from the University of Silesia, where she works as an Assistant Professor. Apart from communication studies, her research interests focus on teachers’ action zone in facilitating group dynamics, affect in language learning, individual learner differences in SLA/FLL and reflective teaching. Her recent publications include: “Anxiety and perceived communication competence as predictors of willingness to communicate in ESL/FL classroom” in D. Gabryś-Barker, J. Bielska (eds.) (2013) The Affective Dimension in Second Language Acquisition. Clevedon: Multilingual Matters; “Communication apprehension and self-perceived communication competence as variables underlying willingness to communicate” in K. Piątkowska, E. Kościałkowska-Okońska (eds.) (2013) Correspondences and Contrasts in Foreign Language Pedagogy and Translation Studies. Berlin: Springer-Verlag. Recently, she has co-edited Positive psychology perspectives on foreign language learning and teaching, Berlin: Springer-Verlag (with Danuta Gabryś-Barker). She is also one of the main organizers of the annual international SLA conference held in Szczyrk, Poland.

Adam Wojtaszek is an Associate Professor and Director of the Institute of English, University of Silesia, Katowice, Poland. His major fields of interest include linguistic pragmatics, psycholinguistics and the language of persuasion. He has published two books on advertising language, Deciphering Radio Commercials – A Pragmatic Perspective (2002) and Theoretical Frameworks in the Study of Press Advertisements – Polish, British and Chinese Perspective (2011), as well as a number of articles on the topic. Within the area of psycholinguistics and second language acquisition studies he has co-edited a number of volumes reporting on recent studies and developments. Together with Danuta Gabryś-Barker, he is an editor of a new journal (est. 2015), Theory and Practice of Second Language Acquisition, published by the University of Silesia Press. He is also one of the organizers of the annual international SLA conference held in Szczyrk, Poland and initiated in the mid-1980s by Janusz Arabski.

Paweł Zakrajewski is an Assistant Professor at the Institute of English, University of Silesia in Katowice, Poland. He received his Ph.D. in linguistics from the University of Silesia in 2015. His scientific interests centre on discourse analysis, rhetoric and communication (especially new media), translation, and cross-cultural and cross-linguistic comparative studies. Recently, he has been involved in a number of projects related to genre and linguistic analysis, effective communication, public relations, and ESP translation. Dr. Zakrajewski is also (together with Dr Dagmara Gałajda) the co-founder and organizer of the Silesian Meeting of Young Scholars (SMYS) – an international conference intended to compare, enhance, and promote linguistic research among Ph.D. candidates from different countries around the globe.