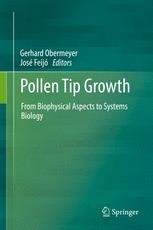 From Biophysical Aspects to Systems Biology

This book focuses on the biophysical aspects of tip growth: How do physical parameters like pressure, water potential, electrical fields, or ion currents contribute to and influence this specialized and highly dynamic form of cell growth?

It provides an updated and balanced overview of the current state of knowledge and future research perspectives regarding how pollen tubes’ growth is driven and regulated by molecular interactions underlying the cellular processes. The individual chapters address topics ranging from molecular biophysical concepts to comprehensive omic studies and computational modeling of the tip growth process. In addition, a chapter on root hair cells is included to provide an alternative view on the underlying molecular principles of tip growth in general.

Each chapter provides a summary of cutting-edge techniques, results and experimental data; a statement, hypothesis or conclusion on the importance of the aspect described for tip growth, particularly pollen tip growth; and addresses open gaps in our understanding and potential approaches to remedying them.

The book offers experimental and theoretical solutions to help established researchers and newcomers to the field alike solve the many mysterious behaviors of pollen tube tips.

Gerhard Obermeyer studied Biology at the University of Constance, Germany, with majors in membrane and cell biophysics. His Ph.D. thesis at the Technical University of Karlsruhe (Germany) included the quantitative imaging of tip-localised Ca2+ gradients in pollen tubes and first patch-clamp experiments to characterise pollen ion channels. As a post-doc he worked at Wye College (now part of Imperial College, London, UK) on ion channels from guard cells and pollen grains, and continued pollen research at the Institute of Plant Physiology (Univ. Salzburg, Austria) with intermediate fellowships to visit labs at the Univ. Adelaide (Australia), at Univ. Nacional Autonoma de Mexico (Cuernavaca, Mexico) and at Univ. Oxford (UK) to work on symbiosome membranes and intracellular pH measurements, respectively. Finally, he became associate professor at the Univ. Salzburg where he established molecular plant physiology in research and teaching.

Prof Obermeyer’s research focusses mainly on pollen physiology. Growth of pollen tubes through the style tissue is a prerequisite for successful fertilization which guarantees high crop yields for human nutrition. Problems caused by global warming like drought and temperature stress, can disturb pollen function and are studied using several single molecule/cell techniques in combination with -omics approaches to reveal functional protein complexes in the plasma membrane and their role in osmosensing and osmoregulation as well as in tip growth.

José Feijó studied Biology in the University of Lisbon, Portugal, specializing in Cell Biology of orchid pollen and a Master in Plant Biotechnology. During his Ph.D. he enlarged his focus into development, progressively introducing electrophysiology and mathematical modelling as routine approaches to the study of pollen tubes. A Fullbright fellowship brought him to Peter Hepler lab in the U. Massachussets in Amherst to further deepening his skills on ion imaging. Return to the University of Lisbon in 1996 marked the beginning of a professorship and independent research career, which from 1999-2013 he ran in parallel with an independent lab in the Gulbenkian Institute for Science. Along this path, he has served as director of the Imaging Unit, organized over a dozen EMBO Practical course on Plant Development and Imaging, acted as curator and was responsible for a number of initiatives to commemorate Darwin’s bicentenary in 2009 and collaborated with numerous educational projects. In late 2013 he moved to the University of Maryland, in College Park, and lives in Washington DC.

Research in Feijó’s group is focused on the development of integrated models of apical cell growth and morphogenesis, using the pollen tube as a biological model, ion dynamics as an experimental paradigm and theoretical modeling as an integrative tool. The group uses Arabidopsis, lily, tobacco and tomato as model species for higher plants, and the moss Physcomitrella as an evolutionary correlate of apical growth evolution.  On the path to develop models by which ion dynamics choreographies integrate spatial and temporal cues to coordinate cell biology, the group contributed with novel ion channels and sensors involved in pollen tube biology, and their regulation mechanisms. Most results involve a combination of imaging, electrophysiology, genetics and molecular biology. Feijó’s group further pioneered transcriptomics of plant male gametes and its consequences for plant reproduction and improvement, namely at the epigenetics level. These activities were routinely grounded in collaborations with groups on over 12 countries in the 4 continents.

The authors met at the Sexual Plant Reproduction meeting in Vienna, Austria, 1998, and collaborate and became good friends ever since.