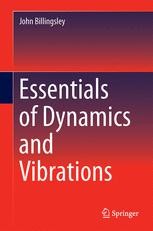 Essentials of Dynamics and Vibrations

Dynamic objects move in mysterious ways. Their analysis is a difficult subject involving matrices, differential equations and the complex algebra of oscillatory systems. However, in this textbook, the author draws on his long experience of designing autopilots, robots for nuclear inspection and agricultural machine guidance to present the essentials with a light touch. The emphasis is on a deep understanding of the fundamentals rather than rote-learning of techniques. The inertia tensor is presented as a key to understanding motion ranging from boomerangs to gyroscopes. Chains of transformations unravel the motion of a robot arm.

To help the reader visualise motion, ranging from unbalanced rotors to vibrating systems with multiple modes and damping, there are abundant simulation examples on a linked website. These will run in any web browser, while their simple code is on open view for modification and experimentation. They show that nonlinear systems present no problems, so that friction damping can be modelled with ease.

A particular problem for mechanical engineers is that the vibration topics encroach on the territory of the electrical engineer. State variables open up control theory while the solution of differential equations with sinusoidal inputs is simplified by an understanding of sine-waves as complex exponentials. The linked web site has several areas of mathematics revision to help.

A final chapter pokes fun at the misrepresentation of dynamics in cinema productions.

John Billingsley graduated in mathematics and in electrical engineering from Cambridge University in 1960. After four years working in industry on autopilot design, he returned to Cambridge and gained a PhD in control theory.

He led research in Cambridge University developing early 'mechatronic' systems including a laser phototypesetting system and the 'acoustic telescope'.

He moved to Portsmouth Polytechnic in 1976, founding the Robotics Research Group. The results of the Walking Robot unit led to the foundation of Portech Ltd, which for many years supplied robotic systems to the nuclear industry.

In April 1992 he took up a Chair of Engineering at the University of Southern Queensland in Toowoomba. His primary concern is Mechatronics and he supervises Technology Research in the National Centre for Engineering in Agriculture (NCEA). Three prototypes of novel wall-climbing robots were completed at USQ.

He is the international chairman of an annual conference series on "Mechatronics and Machine Vision in Practice," now in its twentieth year. He promoted and presented Micromouse robot maze contests around the world from 1980 to the mid nineties.

He was awarded an Erskine Fellowship by the University of Canterbury, New Zealand. In December 2006 he received an achievement medal from the Institution of Engineering and Technology, London.

His machines have been exhibited in the 'Palais de la Decouverte' in Paris, in the 'Exploratorium' at San Francisco and in the Institute of Contemporary Arts in London. Several of his robots are now on show in the Powerhouse Museum, Sydney.