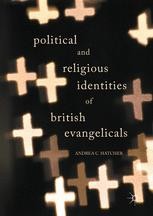 This book examines the paradoxical relationship between the religious and political behaviors of American and British Evangelicals, who exhibit nearly identical religious canon and practice, but sharply divergent political beliefs and action. Relying on interviews with British religious and political elites (journalists, MPs, activists, clergy) as well as focus groups in ten Evangelical congregations, this study reveals that British Evangelicals, unlike their American counterparts known for their extensive involvement in party politics, have no discernible ideological or partisan orientation, choosing to pursue their political interests through civic or social organizations rather than electoral influence. It goes further to show that many British Evangelicals shun the label itself for its negative political connotations and in-/out-group sensibility, and choose to focus on a broader social justice imperative rendered almost incoherent by a lack of group identity. Placing itself at the forefront of an incipient but growing segment of comparative research into the intersectionality of religion and politics, the work satisfies a lacuna of how the same religious tradition can act differently in public squares contextualized by political and cultural variables.

Andrea C. Hatcher is Associate Professor of Politics at The University of the South, USA

“The political stance of Evangelicals in the United States has long been the subject of scholarly attention, but it has been compared all too little with the political posture of co-religionists elsewhere.  Andrea Hatcher has examined the attitudes of English Evangelicals, concluding that, although they are religiously identical with their American counterparts, they are strikingly different politically. Whereas American Evangelicals are generally committed to the conservative side in the culture wars, English Evangelicals are not corporately mobilised for political action and tend to prioritise issues of social justice.  Commentators on both sides of the Atlantic will have much to ponder in her findings.” (Dr. David Bebbington, Professor of History, University of Stirling)

“Based on a mixed-methods approach and demonstrating analytical rigour throughout, Hatcher provides a detailed and thought-provoking study of Evangelicals in Britain. It provides a conceptually-nuanced and empirically-rich assessment of their varying identities and of the nature and extent of their political and cultural engagement. It carefully delineates how they differ from Evangelicals in the USA, showing how the particularities of national context affect how religious groups mobilise and engage with the public sphere. The book makes a distinctive contribution to the study of the role religion plays in contemporary British politics and society.” (Dr. Ben Clements, Lecturer in Politics, University of Leicester)

“Hatcher's work joins a growing and distinguished line of argument that religion is highly responsive to place. Drawn out with a rich narrative allowing UK evangelical Christians to speak for themselves, Hatcher argues that if the political system can generate political religion, as seen in the US, it can also hinder it in the case of UK evangelicals. This is well worth a social scientist's time.” (Paul Djupe, Associate Professor of Political Science, Denison University, and Affiliated Scholar at Public Religion Research Institute)

“The relationship between Christianity and politics in the UK remains an enigmatic topic, with the cultural alignments of the past giving way to less predictable arrangements in our politically unstable present. It is a relationship that demands closer scrutiny in light of the international connections that increasingly frame our religious landscape. With this in mind, Andrea Hatcher's insightful analysis of British evangelicals is especially welcome. Building on empirical research with congregations and the leaders who influence them, Hatcher outlines the distinctive ways in which British evangelicals engage with politics by drawing illuminating comparisons and contrasts with evangelicalism in the USA. Hatcher's book uses fresh evidence to challenge popular assumptions about a commonly misunderstood religious movement. I recommend it to all those interested in politics, evangelicalism and the complex relationships between the two.” (Dr. Mathew Guest, Reader in Sociology of Religion, Durham University)

“Using ethnographic methods to engage in the study of British evangelicals, Hatcher analyzes how the religious and political identities of evangelicals, despite the religious commonalities they share, strikingly differ between the American and British cultural contexts and why that is the case.” (Corwin E. Smidt, Senior Research Fellow at The Henry Institute for the Study of Christianity and Politics, Calvin College, and author of American Evangelicals Today)

“Analyses of evangelicals in Britain, and their political ambitions, is often lazy, marked by received wisdom and outright prejudice. Too few people have bothered to listen to what they say and observe what they do. Andrea Hatcher has done both and the result is a perceptive, intelligent and badly-needed analysis of the true – and varied – religious and political Identities of British Evangelicals.” (Nick Spencer, Research Director, Theos)
Show all