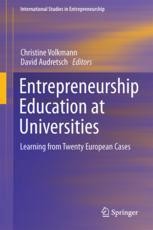 David Audretsch is a Distinguished Professor and Ameritech Chair of Economic Development at Indiana University, where he is also serves as Director of the Institute for Development Strategies. He also is an Honorary Professor of Industrial Economics and Entrepreneurship at the WHU-Otto Beisheim School of Management in Germany and a Research Fellow of the Centre for Economic Policy Research in London.

Audretsch's research has focused on the links between entrepreneurship, government policy, innovation, economic development and global competitiveness. His books include Everything in its Place: The Strategic Management of Cities, Regions and States with Oxford University Press in 2015 and The Handbook of Local Competitiveness, also with Oxford University Press in 2015. He is co-founder and co-editor of Small Business Economics: An Entrepreneurship Journal. He was awarded the 2001 Global Award for Entrepreneurship Research by the Swedish Foundation for Small Business Research. In 2008 he received an honorary doctorate degree from the University of Augsburg, and in September, 2010 he received an honorary doctorate degree from Jonköping University. In 2011 he was awarded the Schumpeter Prize from the University of Wuppertal.

He is a member of the Advisory Board to a number of international research and policy institutes, including Chair of the the Deutsches Institut für Wirtschaftsforschung Berlin (German Institute for Economic Analysis Berlin), Chair of the Stifterverband für die Deutsche Wissenschaft (Foundation for the Promotion of German Science), New York Academy of Sciences, the Swedish Entrepreneurship Forum, and the Jackstädt Centre for Entrepreneurship in Wuppertal, Germany.