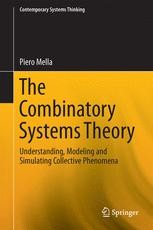 This study adopts the logic of Systems Thinking and Control Systems, presenting a simple but complete theory called the Theory of Combinatory Systems. This new theory is able to describe, interpret, explain, simulate and control collective phenomena and their observable effects. Despite specific differences among these phenomena – many of which are “one way", non-repeatable or reproducible – they can all be described or explained, and thus understood, using the model, as simple as it is general, of combinatory systems; that is, systems formed by collectivities, or populations of non-connected and unorganized individuals of some species, which appear to be directed by an invisible hand that guides the analogous actions of similar individuals in order to produce an emerging collective phenomenon. Combinatory Systems function due to the presence of micro control systems which, operating at the individual level, lead to uniform micro behavior by individuals in order to eliminate the (gap) with respect to the objective that is represented – or revealed – by the global information (macro behavior or effect). The book also examines Combinatory Automata, which represent a powerful tool for simulating the most relevant combinatory systems. In stochastic combinatory automata, when both probabilities and periods of transition of state are agent/time/state sensitive, the probabilistic micro behaviors are conditioned by the macro behavior of the entire system, which makes the micro-macro feedback more evident.

The Combinatory Systems Theory: Understanding, Modeling and Simulating Collective Phenomena is composed of four main chapters. Chapter 1 presents the basic ideas behind the theory, which are analysed in some detail. Chapter 2 describes the heuristic models of several relevant combinatory systems observable in different environments. Chapter 3, while not making particular use of sophisticated mathematical and statistical tools, presents the Theory of Combinatory Automata and builds models for simulating the operative logic of combinatory systems. Chapter 4 tries to answer three questions: are combinatory systems “systems” in the true sense of the term? Why is this theory able to explain so many and so varied a number of phenomena, even though it is based on a very simple modus operandi? Are combinatory systems different than complex systems? The book has been written with no prerequisite required to read and understand it, in particular math, statistics and computer knowledge.

Piero Mella is Full Professor of Business Economics and Control Theory at the Faculty of Economics, University of Pavia. In the past he has been the Dean of the Faculty as well as the Director of its Department of Business Research. He has authored dozens of publications (among which a treatise entitled Amministrazione d’Impresa [Management of the Firm], UTET Press), and for years he has researched systems theory from multiple perspectives. His recent essays about Systems theory include: Guida al Systems Thinking [A Guide to Systems Thinking] (Il Sole24Ore, Milano, 2007) and Sistemi di controllo [Control Systems] (Franco Angeli, Milano, 2008), and Systems Thinking: Intelligence in Action (2012). He has developed the Theory of Combinatory Systems; he is editor of the journal "Economia Aziendale on-line".