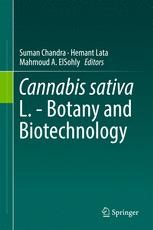 Cannabis sativa L. (Family: Cannabaceae) is one of the oldest sources of fiber, food and medicine.  This plant has been of interest to researchers, general public and media not only due to its medicinal properties but also the controversy surrounding its illicit use. Cannabis has a long history of medicinal use in the Middle East and Asia, being first introduced as a medicine in Western Europe in the early 19th century. Due to its numerous natural constituents, Cannabis is considered a chemically complex species. It contains a unique class of terpeno-phenolic compounds (cannabinoids or phytocannabinoids), which have been extensively studied since the discovery of the chemical structure of tetrah

ydrocannabinol (Δ9-THC), commonly known as THC, the main constituent responsible for the plant’s psychoactive effects. An additionally important cannabinoid of current interest is Cannabidiol (CBD). There has been a significant interest in CBD and CBD oil (extract of CBD rich Cannabis) over the last few years because of its reported activity as an antiepileptic agent, particularly its potential use in the treatment of intractable epilepsy in children.
Show all
About the authors