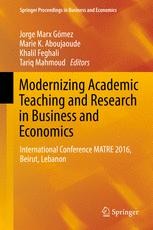 Modernizing Academic Teaching and Research in Business and Economics

This proceedings volume brings together the results of a corporate discussion on research, academic teaching and education in the field of business and economics in the context of globalization. The contributions examine leadership and sustainability, quality and governance and the internationalization of higher education. With a particular focus on business education and business schools, the book discusses the labor market and modernization as well as contemporary trends and challenges. By including both academic papers and contributions from industry, it forges research links between academia, business and industry.

Jorge Marx Gómez studied Computer Engineering and Industrial Engineering at the University of Applied Science in Berlin (Technische Fachhochschule Berlin, Germany). He was a lecturer and researcher at the Otto-von-Guericke-University Magdeburg where he also obtained a PhD degree 2001 in Business Information Systems with a thesis on “Computer-based Approaches to Forecast Returns of Scrapped Products to Recycling”. From 2002 until 2003 he was a visiting professor for Business Informatics at the Technical University of Clausthal (Technische Universität Clausthal, Germany) and worked as lecturer in different countries. In 2004 he received his postdoctoral lecture qualification (Habilitation) for his work on “Automated Environmental Reporting through Material Flow Networks” at the Otto-von-Guericke-University Magdeburg. In April 2005 he received the research price of the faculty of computer science at the Otto-von-Guericke-University Magdeburg. Since 2006 Jorge Marx Gómez is a full professor and chair of Business Information Systems / Very Large Business Applications (VLBA) at the Carl von Ossietzky University of Oldenburg.His research interests include Business Information Systems, Federated ERP-Systems, Business Intelligence, Big Data, Interoperability, Environmental Management Information Systems and e- and Mobile-Commerce.