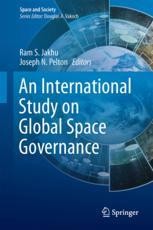 This book is based on the findings, conclusions and recommendations of the Global Space Governance study commissioned by the 2014 Montreal Declaration that called upon civil society, academics, governments, the private sector, and other stakeholders to undertake an international interdisciplinary study. The study took three years to complete. It examines the drivers of space regulations and standards, key regulatory problems, and especially addresses possible improvements in global space governance. The world's leading experts led the drafting of chapters, with input from academics and knowledgeable professionals in the public and private sectors, intergovernmental organizations, and nongovernmental organizations from all the regions of the world with over 80 total participants. This book and areas identified for priority action are to be presented to the UN Committee on the Peaceful Uses of Outer Space and it is hoped will be considered directly or indirectly at the UNISPACE+50 event in Vienna, Austria, in 2018.

The report, a collective work of all the contributors, includes objective analysis and frank statements expressed without pressure of political, national, and occupational concerns or interest. It is peer-reviewed and carefully edited to ensure its accuracy, preciseness, and readability. It is expected that the study and derivative recommendations will form the basis for deliberations and decisions at international conferences and meetings around the world on the theme of global space governance. This will hopefully include future discussion at the UN Committee on the Peaceful Uses of Outer Space.

Prof. Ram S. Jakhu is Associate Professor at the Institute of Air and Space Law, Faculty of Law, McGill University, Montreal, Canada, where he teaches and conducts research in international space law, law of space applications, law of space commercialization, government regulation of space activities, law of telecommunications and Canadian communications law, and public international law. He is a member of the Global Agenda Council on Space of the World Economic Forum and a Fellow as well as the Chairman of the Legal and Regulatory Committee of the International Association for the Advancement of Space Safety (IAASS). In 2007, he received a “Distinguished Service Award” from the International Institute of Space Law for significant contributions to the development of space law. He is managing editor of the Space Regulations Library series and a member of the editorial boards of the Annals of Air and Space Law and of the German Journal of Air and Space Law. He served as the fir

Dr. Joseph N. Pelton currently serves as a member of the Executive Board of the International Association for the Advancement of Space Safety. He is the former Chairman of the Board of Trustees and Vice President and Dean of the International Space University as well as the Director Emeritus of the Space and Advanced Communications Research Institute (SACRI) at George Washington University. Dr. Pelton also served as Director of the Accelerated Mas

ters of Science Program in Telecommunications and Computers at the George Washington University from 1998 to 2005. Dr. Pelton was the founder of the Arthur C. Clarke Foundation and remains as the Vice Chairman on its Board of Directors. Pelton is a widely published and award winning author with over 40 books written or co-authored or co-edited with colleagues. His book Global Talk was nominated for a Pulitzer and won the Eugene Emme literature award. Dr. Pelton is a full member of the International Academy of Astronautics, an Associate Fellow of the American Institute of Aeronautics and Astronautics (AIAA) and a Fellow of the International Association for the Advancement of Space Safety (IAASS). He was the Founding President of the Society of Satellite Professional International (SSPI) and a member of the SSPI Hall of Fame. He has served as President of the Comsat Alumni and Retirees Association (COMARA). Until recently he was as President of the International Space Safety Foundation. He received his degrees as follows: BS from the University of Tulsa, MS from the New York University and his doctorate from Georgetown University.
Show all