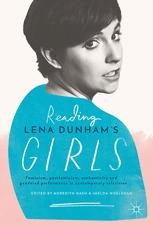 In this book, leading and emerging scholars consider the mixed critical responses to Lena Dunham’s TV series Girls and reflect on its significance to contemporary debates about postfeminist popular cultures in a post-recession context. The series features both familiar and innovative depictions of young women and men in contemporary America that invite comparisons with Sex and the City. It aims for a refreshed, authentic expression of postfeminist femininity that eschews the glamour and aspirational fantasies spawned by its predecessor. This volume reviews the contemporary scholarship on Girls, from its representation of post-millennial gender politics to depictions of the messiness and imperfections of sex, embodiment, and social interactions. Topics covered include Dunham’s privileged role as author/auteur/actor, sexuality, body consciousness, millennial gender identities, the politics of representation, neoliberalism, and post-recession society. This book provides diverse and provocative critical responses to the show and to wider social and media contexts, and contributes to a new generation of feminist scholarship with a powerful concluding reflection from Rosalind Gill. It will appeal to those interested in feminist theory, identity politics, popular culture, and media.

Meredith Nash is Senior Lecturer in Sociology at the University of Tasmania, Australia. She is the author of Making Postmodern Mothers (2012) and editor of Reframing Reproduction (2014).

Imelda Whelehan is Dean of Higher Degree Research at the Australian National University. Her books include Overloaded (2000), Helen Fielding’s Bridget Jones’s Diary (2002), The Feminist Bestseller (2005), and she is co-author of Key Concepts in Gender Studies with Jane Pilcher (2017).

“This compelling collection reads Lena Dunham’s Girls in all of its awkward complexity. Fresh and incisive, the essays are unflinching in their analyses of the series’ uncomfortable representations of the intricacies and intimacies constituting millennial gender identities. The collection teases out the series’ messy feminist politics and reinvigorates debates about the popular currency of feminism and postfeminism in a post-recession context.” (Dr Becky Munford, Reader in English Literature, Cardiff University, UK)

“This collection takes a fresh approach to examining what is arguably one of the most significant television dramas of the 21st century so far. The contributors pass an insightful gaze onto a plethora of postfeminist anxieties, but also issues of production and reception in the context of television as a cultural industry. Nash and Whelehan’s superb collection will prove to be of immense value to scholars and students working within a number of diverse disciplines.” (Joel Gwynne, Associate Professor of English and Cultural Studies, Nanyang Technological University, Singapore)

“With fifteen chapters ranging on topics from sex and bodies to masculinity and music, Reading Girls comprehensively considers and engages with the myriad debates about Lena Dunham's show and her authorial identity…It is a book anyone interested in twenty-first century television and gender must have.” (Shelley Cobb, Associate Professor of Film, University of Southampton, UK)

“With its provocative depiction of class, race, age, sexual and body politics, and positioning at the interface between feminisms (both conventional and emergent) and postfeminisms, Girls has proven itself a lightning rod for debates about gender and generation in recent years.  Nash and Whelehan have gathered together a set of essays that move those debates on substantially and collectively illuminate a landmark TV series.” (Diane Negra, Professor of Film Studies and Screen Culture, University College Dublin, Ireland)