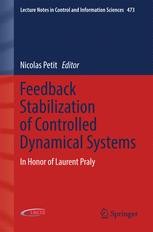 In Honor of Laurent Praly

This book is a tribute to Professor Laurent Praly and follows on from a workshop celebrating the occasion of his 60th birthday.

It presents new and unified visions of the numerous problems that Laurent Praly has worked on in his prolific career: adaptive control, output feedback and observers, stability and stabilization. His main contributions are the central topic of this book.

Organized in three sections, the first section covers the field of adaptive control, where Laurent Praly started his career. The second section focuses on stabilization and output feedback, which is also the topic of the second half of his career. Lastly, the third section presents the emerging research that will form Laurent Praly’s scientific legacy.

Nicolas Petit was born in Paris, France, in 1972. He graduated from Ecole Polytechnique in 1995, and obtained his Ph.D. in Mathematics and Control at Ecole Nationale Supérieure des Mines de Paris in 2000, and the “Habilitation à Diriger des Recherches” from Université Paris 6, in 2007.

He is a professor at and head of the Centre Automatique et Systèmes, MINES ParisTech, PSL Research University.

His research interests include constrained optimal trajectory generation, delay systems, and nonlinear observers. He is also active in industrial process control, control of multiphasis flow, internal combustion engines, guidance navigation and control. Dr. Petit received two times the “Journal of Process Control Paper Prize” for Best article over the periods 2002–2005 and 2008–2011, and is recipient of the 2016 Production and Operations Regional Award from Society of Petroleum Engineers.

He has developed the controllers of several industrial chemical reactors, manufacturing processes, microfluidics processes, and the patented software ANAMEL, currently used at numerous refineries for blending commercial fuels, worldwide. He is the co-founder and was scientific director of a startup company from 2008 to 2013 and has been a board member and scientific advisor at Wandercraft and IDMOG since 2013. He is an expert for the Academic Senate of IFPEN since 2014. He served as associate editor for Automatica between 2006 and 2015 and has been an associate editor and subject editor for the Journal of Process Control since 2012 and 2014 respectively.

Laurent Praly received the engineering degree from the Ecole Nationale Superieure des Mines de Paris (Mines-ParisTech) in 1976 and the Ph.D. degree in Automatic Control and Mathematics from the Universite Paris IX Dauphine in 1988.

His main research interests are in observers and feedback stabilization/regulation for controlled dynamical systems under various aspects—linear and nonlinear, dynamic, output, under constraints, with parametric or dynamic uncertainty, disturbance attenuation or rejection. On these topics, he contributes both on the theoretical aspect with many academic publications, and the practical aspect—applications in power systems, electric drives, mechanical systems in particular walking robots, and aerodynamical and space vehicles.

His article "V. Andrieu and L. Praly: A Unifying Point of View on Output Feedback Designs for Global Asymptotic Stabilization" received the Automatica Survey Prize in 2011.

Laurent Praly is an IFAC Fellow.