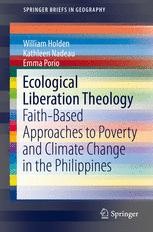 Faith-Based Approaches to Poverty and Climate Change in the Philippines

Climate change-related effects and aftermaths of natural disasters, such as Typhoon Haiyan in the Philippines, have wreaked havoc on local peoples’ lives and livelihoods, especially in impoverished coastal communities. This book looks at local-level responses to the effects of climate change from the perspective of ecological theology and feminism, which provides a solution-based and gender-equitable approach to some of the problems of climate change. It examines how local social and religious action workers are partnering with local communities to transform and reconstruct their lives and livelihoods in the 21st century.

Emma Porio, PhD, is professor of sociology at the Ateneo de Manila University and Science Research Fellow at the Manila Observatory, both located in the Quezon City campus. She authored the following selected books: The Filipino Family, Community and Nation: Yesterday, Today and Tomorrow (Institute of Philippine Culture, Quezon City), Partnership with the Poor: Local Resource Management Approach to Development (Pasig City: National Economic Development Authority Press), Urban Governance and Poverty Alleviation in Southeast Asia (Center for Social Policy, Ateneo de Manila University). Her articles on poverty, gender, governance, climate, disasters, resilience and resource management has appeared in the following ISI-/Scopus-listed journals like the Asian Journal of Social Science (Brill Publishers), Habitat International (Pergammon Press), Space and Polity (London), Contemporary Politics (London),  City: Analysis of Urban Trends, Culture, Theory, Policy, Action (London) and edited books published by reputable publishers in the region like the Ateneo de Manila Press, National University of Singapore Press and the Institute of Southeast Asian Studies Press. William N. Holden, PhD, is an Associate Professor of Geography at the University of Calgary, Alberta, Canada. His current research interests include: the Philippines, the meteorological hazards of anthropogenic climate change, the efficacy of mining as a development strategy, insurgency/ counterinsurgency warfare, state terrorism, and the roles played by liberation theology and Maoism as counter hegemonic discourses in the twenty-first century. Along with Dan Jaocobson he is the author of Mining and Natural Hazard Vulnerability in the Philippines: Digging to Development or Digging to Disaster? Published in 2012 by Anthem Press.
Show all