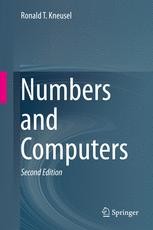 This is a book about numbers and how those numbers are represented in and operated on by computers. It is crucial that developers understand this area because the numerical operations allowed by computers, and the limitations of those operations, especially in the area of floating point math, affect virtually everything people try to do with computers. This book aims to fill this gap by exploring, in sufficient but not overwhelming detail, just what it is that computers do with numbers.

Divided into two parts, the first deals with standard representations of integers and floating point numbers, while the second examines several other number representations. Details are explained thoroughly, with clarity and specificity. Each chapter ends with a summary, recommendations, carefully selected references, and exercises to review the key points. Topics covered include interval arithmetic, fixed-point numbers, big integers and rational arithmetic. This new edition has three new chapters: Pitfalls of Floating-Point Numbers (and How to Avoid Them), Arbitrary Precision Floating Point, and Other Number Systems.

This book is for anyone who develops software including software engineers, scientists, computer science students, engineering students and anyone who programs for fun.

Dr. Ronald T. Kneusel is a Senior Data Scientist with Harris Corportation. He received his Ph.D. in Computer Science from the University of Colorado, Boulder, in machine learning, and his M.S. in Physics from Michigan State University. His background includes work in breast cancer research and early functional MRI (Medical College of Wisconsin) through medical device development (MR, CT, US) to medical imaging and remote sensing image analysis. He has been deeply involved with software development at all levels since his first forays with an 8-bit Apple II+ computer in the early 1980s hooked him for life. Dr. Kneusel is currently working with Harris Corporation on the application of modern machine learning techniques to remote sensing imagery and related modalities. He is the author of multiple peer-reviewed research articles.

“Kneusel offers a book for all these audiences, and for anyone who would like to delve deeper into this branch of technology. … This book should be an excellent resource in the classroom. It can serve as a good reference for future use and can also be used very profitably for self-study.” (Edgar R. Chavez, Computing Reviews, May, 2018)​