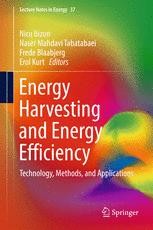 Containing over 200 illustrations and problems and solutions, the book begins with overview chapters on the status quo in this field. Subsequent chapters introduce readers to advanced concepts and methods. In turn, the final part of the book is dedicated to technical strategies, efficient methods and applications in the field of energy efficiency, which also makes it of interest to technicians in industry.

The book tackles problems commonly encountered using basic methods of energy harvesting and energy efficiency, and proposes advanced methods to resolve these issues. All the methods proposed have been validated through simulation and experimental results. These “hot topics” will continue to be of interest to scientists and engineers in future decades and will provide challenges to researchers around the globe as issues of climate change and changing energy policies become more pressing.

Here, readers will find all the basic and advanced concepts they need. As such, it offers a valuable, comprehensive guide for all students and practicing engineers who wishing to learn about and work in these fields.

Nicu BIZON received a five-year degree in electronic engineering from the University “Polytechnic” of Bucharest, Romania, in 1986, and the PhD degree in Automatic Systems and Control from the same university, in 1996. Firstly, he was in hardware design with the Dacia Renault SA, Romania. Currently, he is Professor with the University of Pitesti, Romania, being from 2012 the dean of the Faculty of Electronics, Communication and Computers. Also, he was head of University Research Department (2004-2008) and Executive Director of the Research Centre "Modeling and simulation processes and systems" (2008-2012), being manager of two research project in field of Green and Hydrogen Energy, and team’s member in other four projects in the same research field.

He is editor of seven books in field of Green Energy, Hybrid Power Sources and Power Converters. His current research interests include the broad area of nonlinear systems, on both dynamics and control applied in the Green Energy field. He was authored or co-authored of several papers (over to 150) in journals (ISI web of knowledge or data base indexed) or international conferences proceedings.

He is general chair and proceedings’ Editor of the “Electronics, Computers and Artificial Intelligence - ECAI” Conference and member of the Editorial/Technical Board of several international Journals and Conferences.

He is IEEE member from 2006. He was chair with Management of Technical Activities for IEEE Romania Section (2012).

Naser Mahdavi Tabatabaei was born in Tehran, Iran, 1967. He received the B.Sc. and the M.Sc. degrees from University of Tabriz (Tabriz, Iran) and the Ph.D. degree from Iran University of Science and Technology (Tehran, Iran), all in Power Electrical Engineering, in 1989, 1992, and 1997, respectively. Currently, he is a Professor in International Organization of IOTPE . He is also an academic member of Power Electrical Engineering at Seraj Higher Education Institute (Tabriz, Iran) and teaches power system analysis, power system operation, and reactive power control. He is the General Chair and Secretary of International Conference of ICTPE, Editor-in-Chief of International Journal of IJTPE and Chairman of International Enterprise of IETPE all supported by IOTPE. He has authored and co-authored of 6 books and book chapters in Electrical Engineering area in international publishers and more than 140 papers in international journals and conference proceedings. His research interests are in the area of power system analysis and control, power quality, energy management systems, ICT in power engineering and virtual e-learning educational systems. He is a member of the Iranian Association of Electrical and Electronic Engineers (IAEEE).

Professor Frede Blaabjerg is an IEEE Fellow and Professor in power electronics and drives at Aalborg University, Department of Energy Technology, Denmark. His research interests include power electronics, power converters, adjustable speed drives, control theory, process control, power quality, power electronics reliability as well as renewable energy like solar power and wind energy. He has published more than 400 journal papers and is among the most 250 cited in Engineering according to Thomson Reuters in 2015 and 2016. He is the recipient of the IEEE William E. Newell Power Electronics award as well as a dozen of other awards.

Erol Kurt, born in Unye, Turkey completed his undergraduate degree at Gazi University and took his M.Sc. degree from the Institute of Science & Technology of the same university in 2001. He was awarded by an European Graduate College Grant during his Ph. D study in Bayreuth University (Germany). He worked in Turkish Atomic Energy Authority R&D Department for 3 years. From the middle of 2009, he was assigned to the position of Associate Professor at Technology Faculty of Gazi University in Ankara. He currently works as a Professor at the same department. His research areas include nonlinear phenomena in electrical/electronic circuits, electromagnetic design, vibrations, plasmas and fusion. He has authored or co-authored many scientific papers and chaired a serial conference European Conference on Renewable Energy Systems since 2012. He has served as a guest editor for several SCI-indexed special issue journals. He is a member of the editorial boards of TUBAV Journal of Science.