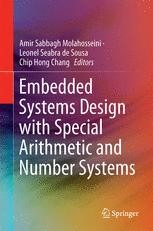 Amir Sabbagh Molahosseini received the B.Sc. degree from Shahid Bahonar University of Kerman, Iran in 2005, M.Sc. and Ph.D. degrees both with the highest honors from Science and Research Branch of Islamic Azad University, Tehran, Iran, in 2007 and 2010, all in computer engineering. He is an Assistant Professor in Department of Computer Engineering, Kerman Branch, Islamic Azad University, Kerman, Iran, and leads the High-Performance Computer Arithmetic Group, since 2010. He was a visiting researcher in the Signal Processing Systems Group, INESC-ID, IST, University of Lisbon, Lisbon, Portugal. His current research interests are Computer Arithmetic with special emphasis on Residue Number Systems, and Alternative Computing Systems with emphasis on Approximate Computing.

Leonel Seabra de Sousa received a Ph.D. degree in Electrical and Computer Engineering from the Instituto Superior Técnico (IST), Universidade de Lisboa (UL), Lisbon, Portugal, in 1996, where he is currently Full Professor. He is also a Senior Researcher with the R&D Instituto de Engenharia de Sistemas e Computadores (INESC-ID). His research interests include VLSI architectures, parallel computing, and computer arithmetic. He has contributed to more than 200 papers in journals and international conferences, for which he got several awards, including: DASIP’13 Best Paper Award, SAMOS’11 ‘Stamatis Vassiliadis’ Best Paper Award, DASIP’10 Best Poster Award, and the Honorable Mention Award UTL/Santander Totta for the quality of the publications in 2009. He has contributed to the organization of several international conferences, namely as program chair and as general and topic chair, and has given keynotes in some of them. He has edited four special issues of international journals, and he is currently Associate Editor of the IEEE Transactions on Multimedia, IEEE Transactions on Circuits and Systems for Video Technology, IEEE Access, IET Electronics Letters and Springer JRTIP, and Editor-in-Chief of the Eurasip JES. Co-editor of the book Circuits and Systems for Security and Privacy, CRC. He is Fellow of the IET, Distinguished Scientist of ACM and Senior Member of IEEE.

Chip Hong Chang received the B.Eng. (Hons.) degree from the National University of Singapore, in 1989, and the M. Eng. and Ph.D. degrees from Nanyang Technological University (NTU), Singapore, in 1993 and 1998, respectively. He served as a Technical Consultant in industry prior to joining the School of Electrical and Electronic Engineering (EEE), NTU, in 1999, where he is currently an Associate Professor. He holds joint appointments with the university as Assistant Chair of Alumni of the School of EEE from June 2008 to May 2014, Deputy Director of the 100-strong Center for High Performance Embedded Systems from 2000 to 2011, and Program Director of the Center for Integrated Circuits and Systems from 2003 to 2009. He has coedited four books, ten book chapters, 86 international journal papers (of which 53 are published in the IEEE Transactions) and 150 refereed international conference papers. He has been well recognized for his research contributions in hardware security and trustable computing, low-power and fault-tolerant computing, residue number systems, and digital filter design and has been frequently invited to deliver keynotes, tutorial and seminars internationally on these topics. He is the co-recipient of the Gold Leaf and Silver Leaf certificates of the 2010 Asia Pacific Conference on Postgraduate Research in Microelectronics and Electronics, and co-author of the finalist of the best student paper competition award for the 2015 IEEE International Symposium on Circuits and Systems and finalist of the best paper award in IFIP International Conference on Very Large Scale Integration in 1995. He received the Collaboration Development Award for Microelectronics and Embedded Systems by the British High Commission of Singapore and the Research Collaboration Award by the Microsystems Strategic Alliance of Quebec (ReSMIQ) in 2007.

Dr. Chang has served as Associate Editor for the IEEE Transactions on Circuits and Systems-I from 2010–2012, IEEE Transactions on Very Large Scale Integration (VLSI) Systems since January 2011, IEEE Access since March 2013, IEEE Transactions on Computer-Aided Design of Integrated Circuits and Systems since January 2016, IEEE Transactions on Information Forensic and Security since January 2016, Springer Journal of Hardware and System Security since June 2016, Microelectronics Journal since May 2014, Integration, the VLSI Journal from 2013–2015, Editorial Advisory Board Member of the Open Electrical and Electronic Engineering Journal from 2007–2013, and the Editorial Board Member of the Journal of Electrical and Computer Engineering from 2008–2014. He also guest edited several journal special issues, organized many special sessions in IEEE conferences and served in more than 50 international conferences (mostly IEEE) as advisory, General Chair, General Vice Chair, Technical Program Co-chair and technical program committee. He is a Senior Member of the IEEE and a Fellow of the IET.