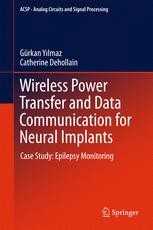 This book presents new circuits and systems for implantable biomedical applications targeting neural recording. The authors describe a system design adapted to conform to the requirements of an epilepsy monitoring system. Throughout the book, these requirements are reflected in terms of implant size, power consumption, and data rate. In addition to theoretical background which explains the relevant technical challenges, the authors provide practical, step-by-step solutions to these problems. Readers will gain understanding of the numerical values in such a system, enabling projections for feasibility of new projects.

Gürkan Yilmaz received his BSc and MSc in Electrical and Electronics Engineering fom Middle East Technical University (METU, Turkey) in 2008 and 2010, and his PhD in Microelectronics and Microsystems from Ecole Polytechnique Fédérale de Lausanne (EPFL, Switzerland) in 2014. He is currently continuing his research as a Postdoctoral Researcher in RFIC Research Group at EPFL. His research interests include the realization of wireless power and data transmission to implanted biomedical sensors and the design of low phase noise frequency generators for biomedical applications.

Catherine Dehollain received the Master degree in electrical engineering in 1982 and the Ph.D. degree in 1995, both from the Ecole Polytechnique Federale de Lausanne (EPFL), Switzerland. From 1982 to 1984, she was a Research Assistant at the Electronics Laboratories (LEG), EPFL. In 1984, she joined the Motorola European Center for Research and Development, Geneva, Switzerland, where she designed integrated circuits applied to telecommunications. In 1990, she joined EPFL as a Senior Assistant at the “Chaire des Circuits et Systemes” (CIRC) where she was involved in impedance broadband matching. Since 1995, she has been responsible at the RFIC Group, EPFL, for RF activities. She has been the technical project manager of the European projects, CTI projects, and the Swiss National Science Foundation projects dedicated to medical applications, RF wireless micropower sensor networks and mobile phones. Since 1998, she has been a Lecturer at EPFL in the area of RF circuits, electric filters, and CAD tools. Since 2014, she is Professor at EPFL. She is an author or coauthor of five scientific books and 160 scientific publications. Her current research interests include low-power analog circuits, biomedical remotely powered sensors, and electric filters.