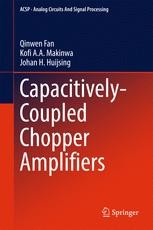 This book describes the concept and design of the capacitively-coupled chopper technique, which can be used in precision analog amplifiers. Readers will learn to design power-efficient amplifiers employing this technique, which can be powered by regular low supply voltage such as 2V and possibly having a +/-100V input common-mode voltage input. The authors provide both basic design concepts and detailed design examples, which cover the area of both operational and instrumentation amplifiers for multiple applications, particularly in power management and biomedical circuit designs.

Qinwen Fan is a Senior Analog Designer at Mellanox Technologies.

Kofi Makinwa holds degrees from Obafemi Awolowo University, Ile-Ife (B.Sc., M.Sc.), Philips International Institute, Eindhoven (M.E.E.), and Delft University of Technology, Delft (Ph.D.). From 1989 to 1999, he was a research scientist at Philips Research Laboratories, where he designed sensor systems for interactive displays, and analog front-ends for optical and magnetic recording systems. In 1999 he joined Delft University of Technology, where he is currently an Antoni van Leeuwenhoek Professor of the Faculty of Electrical Engineering, Mathematics and Computer Engineering and Chair of the Electronic Instrumentation Laboratory.

For his Ph.D. research, Dr. Makinwa was awarded the title of 'Simon Stevin Gezel' by the Dutch Technology Foundation (STW). In 2005, he received a VENI grant from the Dutch Scientific Foundation (NWO). He is a co-recipient of several best paper awards: from the JSSC (2), ISSCC (4), ESSCIRC (2) and Transducers (1). He is an IEEE Fellow, an alumnus of the Young Academy of the Royal Netherlands Academy of Arts and Sciences (KNAW) and an elected member of the AdCom of the IEEE Solid-State Circuits Society.

Johan H. Huijsing was born on May 21, 1938. He received the M.Sc. degree in EE from the Delft University of Technology, the Netherlands in 1969, and the Ph.D. degree from this University in 1981. He has been an assistant and associate professor in Electronic Instrumentation at the Faculty of EE of the Delft University of Technology since 1969. He became a full professor in the chair of Electronic Instrumentation since 1990, and professor-emeritus since 2003. From 1982 through 1983 he was a senior scientist at Philips Research Labs. in Sunnyvale, California, USA. From 1983 until 2005 he was a consultant for Philips Semiconductors, Sunnyvale, California, USA, and since 1998 also a consultant for Maxim, Sunnyvale, California, USA. The research work of Johan Huijsing is focused on operational amplifiers, analog-to-digital converters and integrated smart sensors. He has supervised 30 PhD students. He is author or co-author of more than 300 scientific papers, 40 US patents and 15 books. In 1992 he initiated the international Workshop on Advances in Analog Circuit Design. He co-organized it yearly until 2003. He has been a member of the programme committee of the European Solid-State Circuits Conference from 1992 untill 2002. He was chairman of the Dutch STW Platform on Sensor Technology and of the biannual national Workshop on Sensor Technology from 1991 until 2002. He is Fellow of IEEE, and was awarded the title of Simon Stevin Meester by the Dutch Technology Foundation.