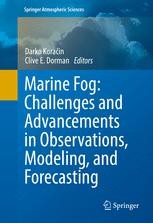 Marine Fog: Challenges and Advancements in Observations, Modeling, and Forecasting

This volume presents the history of marine fog research and applications, and discusses the physical processes leading to fog's formation, evolution, and dissipation. A special emphasis is on the challenges and advancements of fog observation and modeling as well as on efforts toward operational fog forecasting and linkages and feedbacks between marine fog and the environment.

Darko Koračin investigates weather and climate phenomena through the development and application of high-resolution mesoscale meteorological models, microscale models, as well as global and regional climate models. His expertise includes assessing the emission, transport, and dispersion of environmental pollutants as well as applying principles of artificial intelligence (neural networks). His research includes development of a higher-order turbulence closure atmospheric model, a cloud-resolving model, and a large-eddy simulation model, as well as turbulence and radiation parameterizations of existing models. Dr. Koračin has published over 60 peer-reviewed articles in recognized U.S. and international journals and has presented over 120 conference papers at domestic and international conferences. He has served as a reviewer for over 40 peer-reviewed journals and various funding agencies in the U.S. and abroad. He has been invited to visit many institutions and participate in and design environmental research in the US, Denmark, Sweden, Croatia, Brazil, Turkey, Australia, Greece, Uganda, and Chile. He is actively involved in the Atmospheric Sciences graduate program at the University of Nevada, Reno, where he is teaching and mentoring M.S. and Ph.D. students.

Clive Dorman obtained a BA in Physics at the University of California, Riverside. He joined the US Air Force as a weather officer, attending the Basic Weather Officer Course at New York University and served as a duty weather forecaster at Howard AFB in the Canal Zone. He left the Air Force to attend Oregon State University where he received a PhD in physical Oceanography in 1974. He joined the Department of Geological Sciences at San Diego State University to teach courses in oceanography from 1974 through 2012 and is now an emeritus Professor. Dr. Dorman took a leave of absence from San Diego State University 1978-1980 to be a Program Associate in the IDOE Program at the National Science Foundation. He joined Scripps Institution of Oceanography as a visiting scientist 1993-1996 and was a research oceanographer from 1996 to date. His research focus has been on the atmospheric marine boundary layer and its interaction with the ocean which has included coastal California and Oregon, the Gibraltar Strait the Japan Sea and the Adriatic Sea. His research funding was by the National Science Foundation, the Office of Naval Research and the Minerals Management Service  He has authored or co-authored more than 50 published papers and greater than 100 presentations at professional society meetings.
Show all