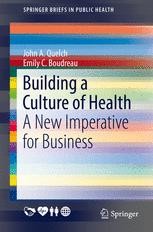 Building a Culture of Health

A New Imperative for Business

This ambitious volume sets out to understand how every company impacts public health and introduces a robust model, rooted in organizational and scientific knowledge, for companies committed to making positive contributions to health and wellness. Focusing on four interconnected areas of corporate impact, it not only discusses the business imperative of promoting a healthier society and improved living conditions worldwide, but also provides guidelines for measuring a company’s population health footprint. Examples, statistics and visuals showcase emerging corporate involvement in public health and underscore the business opportunities available to companies that invest in health. The authors offer a detailed roadmap for optimizing health-promoting actions in a rapidly evolving business and social climate across these core areas:

Building a Culture of Health clarifies both a mission and a vision for use by MPH and MBA students in health management, professors in schools of public health and business schools, and business leaders and chief medical officers in health care and non-health care businesses.

John A. Quelch is the Charles Edward Wilson Professor of Business Administration at Harvard Business School. He also holds a joint appointment at Harvard School of Public Health as Professor in Health Policy and Management. In addition, he is also a Fellow of the Harvard China Fund, a Member of the Harvard China Advisory Board, and Associate in Research at the Fairbank Center for Chinese Studies.
Between 2011 and 2013, Professor Quelch was Dean, Vice President, and Distinguished Professor of International Management at the China Europe International Business School (CEIBS), China's leading business school. Between 2001 and 2011, he was the Lincoln Filene Professor of Business Administration and Senior Associate Dean at Harvard Business School, teaching Marketing in the Advanced Management Program. He served as Dean of London Business School from 1998 to 2001. Prior to 1998, he was the Sebastian S. Kresge Professor of Marketing and Co-Chair of the Marketing Unit at Harvard Business School.
Professor Quelch is known for his teaching materials and innovations in pedagogy. Over the past thirty-five years, his case studies have sold over 4 million copies, third highest in Harvard Business School history. In 1995, he developed the first Harvard Business School interactive CD-ROM exercise (on Intel's advertising budgeting process). In 1999, he developed and presented a series of twelve one hour programs on Marketing Management for the Public Broadcasting System. Professor Quelch currently teaches a new course, "Consumers, Corporations and Public Health" to both MBA and MPH students. A book with this title will be published by Oxford University Press in 2016.
Professor Quelch is the author, co-author, or editor of twenty-five books. He has published eighteen articles on marketing strategy issues in the Harvard Business Review, and many more in other leading management journals such as McKinsey Quarterly and Sloan Management Review.
Professor Quelch has served as an independent director of twelve publicly listed companies in the USA and UK. He recently stepped down as a non-executive director of WPP after twenty-five years of service. He is currently a non-executive director of Alere, a health diagnostics company, Luvo, an innovative food company, and Propel Media, a digital marketing services company. Professor Quelch has also served as a consultant, seminar leader, and speaker for firms, industry associations, and government agencies in more than fifty countries.
In the area of public service, Professor Quelch served pro bono for eight years as Chairman of the Port Authority of Massachusetts. He is the Honorary Consul General of Morocco in New England and served previously as Chairman of the British-American Business Council of New England. He is a member of the Trilateral Commission and the Council On Foreign Relations. He received the CBE for services to British business in 2011 and holds an honorary doctorate from Vietnam National University.
Emily C. Boudreau is a research associate at Harvard Business School in Boston, Massachusetts. She previously worked as a senior associate at Trinity Partners in Waltham, Massachusetts, and as a senior analyst in Research & Insights at The Advisory Board Company in Washington, D.C.