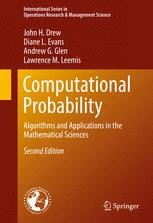 Algorithms and Applications in the Mathematical Sciences

This new edition includes the latest advances and developments in computational probability involving A Probability Programming Language (APPL). The book examines and presents, in a systematic manner, computational probability methods that encompass data structures and algorithms. The developed techniques address problems that require exact probability calculations, many of which have been considered intractable in the past. The book addresses the plight of the probabilist by providing algorithms to perform calculations associated with random variables.
Computational Probability: Algorithms and Applications in the Mathematical Sciences, 2nd Edition begins with an introductory chapter that contains short examples involving the elementary use of APPL. Chapter 2 reviews the Maple data structures and functions necessary to implement APPL. This is followed by a discussion of the development of the data structures and algorithms (Chapters 3–6 for continuous random variables and Chapters 7–9 for discrete random variables) used in APPL. The book concludes with Chapters 10–15 introducing a sampling of various applications in the mathematical sciences. This book should appeal to researchers in the mathematical sciences with an interest in applied probability and instructors using the book for a special topics course in computational probability taught in a mathematics, statistics, operations research, management science, or industrial engineering department.

John Drew is a professor emeritus, retired in 2008 from the Department of Mathematics at The College of William & Mary in Williamsburg, Virginia, U.S.A. He received his BS in mathematics form Case Institute of Technology and his PhD in mathematics from the University of Minnesota. During his academic career he published 25 research papers in linear algebra, operations research, and computational probability.
Dr. Diane Evans is a professor in the Mathematics Department at Rose-Hulman Institute of Technology in Terre Haute, U.S.A. She received her BS and MA degrees in mathematics from The Ohio State University and her MS and PhD in operations research and applied science from The College of William and Mary. Diane was named in Princeton Review's 300 Best Professors in America and was selected as one of Microsoft's 365 "Heroes in Education" in 2012. During her 2015 sabbatical, she worked for Minitab creating educational materials for new statistics instructors. Her current research and teaching interests are in probability, statistics, quality control, and Six Sigma.
Dr. Andrew Glen is a Professor Emeritus of Operations Research from the United States Military Academy, in West Point, NY. He is currently a visiting professor at The Colorado College in Colorado Springs, Colorado. He is a retired colonel from the US Army, and spend 16 years on faculty at West Point. He has published three books and dozens of scholarly articles, mostly on the subject of computational probability. His research and teaching interests are in computational probability and statistical modeling.

Lawrence Leemis is a professor in the Department of Mathematics at The College of William & Mary in Williamsburg, Virginia, U.S.A. He received his BS and MS degrees in mathematics and his PhD in operations research from Purdue University. He has also taught courses at Purdue University, The University of Oklahoma, and Baylor University. He has served as Associate Editor for the IEEE Transactions on Reliability, Book Review Editor for the Journal of Quality Technology, and an Associate Editor for Naval Research Logistics. He has published six books and over 100 research articles, proceedings papers, and book chapters. His research and teaching interests are in reliability, simulation, and computational probability.