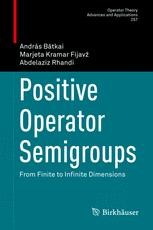 From Finite to Infinite Dimensions

This book gives a gentle but up-to-date introduction into the theory of operator semigroups (or linear dynamical systems), which can be used with great success to describe the dynamics of complicated phenomena arising in many applications. Positivity is a property which naturally appears in physical, chemical, biological or economic processes. It adds a beautiful and far reaching mathematical structure to the dynamical systems and operators describing these processes.
In the first part, the finite dimensional theory in a coordinate-free way is developed, which is difficult to find in literature. This is a good opportunity to present the main ideas of the Perron-Frobenius theory in a way which can be used in the infinite dimensional situation. Applications to graph matrices, age structured population models and economic models are discussed.
The infinite dimensional theory of positive operator semigroups with their spectral and asymptotic theory is developed in the second part. Recent applications illustrate the theory, like population equations, neutron transport theory, delay equations or flows in networks. Each chapter is accompanied by a large set of exercises. An up-to-date bibliography and a detailed subject index help the interested reader.
The book is intended primarily for graduate and master students. The finite dimensional part, however, can be followed by an advanced bachelor with a solid knowledge of linear algebra and calculus.

András Bátkai was born in Budapest, Hungary, in 1972, received his PhD in 2000 in Tübingen and is currently associate professor of mathematics at the Eötvös Loránd University Budapest. He is mainly interested in the theory and applications of operator semigroup theory, in paricular in applications to delay equations.He is the author of a research monograph and over 25 research papers, and the editor of the Open Mathematics journal. He was a fellow of the Alexander-von Humboldt Stiftung, held several Marie-Curie postdoctoral fellowships and and the Alexits prize of the Hungarian Academy of Sciences.

Marjeta Kramar Fijavž was born in 1973 in Ljubljana, Slovenia. She received her PhD in Mathematics in 2004 at University of Ljubljana and has been associate professor of mathematics there since 2013. Her primary interest is in linear algebra and operator theory, in particular operator semigroups, evolution equations, and dynamical networks.

Abdelaziz Rhandi was born in Casablanca, Morocco, in 1964. He received the  first Ph.D degree from the University of Besançon (France) and the second Ph.D degree from the University of Tübingen (Germany). Presently, he is full professor of analysis at the University of Salerno (Italy). His main interest is in applied functional analysis and partial differential equations. He is the author of more than 50 publications, and the editor of the journals Semigroup Forum and Positivity. He was the winner of the 2006 HP Technology for Teaching Higher Education and a fellow of the Alexander-von Humboldt Stiftung.

Show all
Reviews
“The book covers a remarkable range of material, from basic to relatively advanced, and its coherent and streamlined exposition of both the classical theory and modern applications makes it a very useful addition to the literature … . Overall, the book works very well as a modern introduction to the theory of positive operator semigroups, and its broad scope and application-driven approach are likely to make it a standard reference work for newcomers to the subject and experts alike.” (David Seifert, zbMATH 1420.47001, 2019)
“The book gathers diverse material around the subject of positive operator semigroups and illustrates it well with a large number of evolution equations, to give in the end an original contribution to the literature. Each section contains notes and remarks, and ends with exercises. Mathematicians from a graduate student level on should find this book useful.” (Christoph Kriegler, Mathematical Reviews, February, 2018)