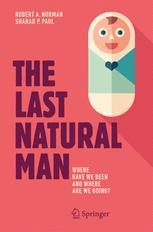 Where Have We Been and Where Are We Going?

This book explores cultural evolution and the meaning of the word 'natural'.
We are at the crossroads of a major transformation.  Why is our current time so important in the history of man? We are at a point where we may be the last generation that is not partially or fully bionic.  The last natural man: natural in what way?  What is “natural”? Is it a catch phrase like “integrative” or “holistic” that transmits a certain magical warm glow?   If the word “natural” was a plant, it would be beautiful, green, luxuriant, and edible.Does it mean we are the last to not replace or modify our parts? What about laser surgery? Knee or hip replacement? Botox and fillers? Chemical therapy?  Or a directional chip in the brain?Do we really mean the very last natural man? Cultural evolution has been the major driving force over the last several thousand years and enormous in its influence compared to almost invisible changes in our physical adaptations. If cultural and religious evolution was the driver for human history, are we now entering the phase of physical transformation – where humanity refuses to accept mortality and seeks to make changes to defeat nature.
In this book the authors are describing a paradigm shift of all of humanity—just as  hunter-gatherers had their stellar features, the future man will have many attractive qualities, even if many artificial. We are often balancing on the precipice between science and science fiction, now ready to tip the scales and slide comfortably into the future of great discoveries and wonderful changes.  But are these changes all for the good? What will being human mean?
"A lively, superbly informed, compassionate conversation between two accomplished physician-writers about the human past and the human future, carefully grounded in the sciences of medicine and evolution. If you care about who we are and what may save us from ourselves, read this enormously informative and entertaining book." Melvin Konner, MD, PhD, author of The Tangled Wing: Biological Constraints on the Human Spirit and Women After All: Sex, Evolution, and the End of Male Supremacy

Dr. Robert A. Norman is a board-certified dermatologist and family practitioner who has been in practice for over 25 years. He is a faculty member for five medical schools and has been honored with numerous service and teaching awards, including Physician of the Year (2005) and Distinguished Service Award (2007) in Hillsborough County, Tampa, Florida.  He has been the editor and contributing writer of eight textbooks on Geriatrics and Geriatric Dermatology and published over 150 articles in various major media publications. Dr. Norman has a private practice and is the chief physician and owner of Dermatology Healthcare, founded in 1994, which delivers essential skin care services for nursing home patients.

Sharad P. Paul MD is a skin cancer surgeon, family physician, academic, skincare expert, evolutionary biologist, storyteller and social entrepreneur. Born in England, with a childhood in India, he is a ‘global citizen’ who lives Down Under. In 2003, he received a Health Innovation Award. In 2008, he was featured in international editions of TIME magazine in an article titled ‘Open Heart Surgeon.’ He has been called ‘Renaissance Man’ by New Zealand Herald’s Canvas magazine and ‘polymath’ by Good magazine. In 2012, he was awarded the NZ Medical Association’s highest honor, the Chair’s Award, and was a finalist for the New Zealander of the Year Award. He has spoken at ideas conferences like THiNK alongside Robert De Niro, Tina Brown, David Barash, VS Naipaul and at several major literary festivals such as India’s Jaipur Literary Festival alongside Margaret Atwood, Stephen Fry, Atul Gawande etc. and at Dublin’s Dalkey Book Festival alongside Malcolm Gladwell. In 2015, he was awarded the Ko Awatea International Excellence in Health Improvement Award, an 'Award for Leading Health Improvement on a Global Scale.’