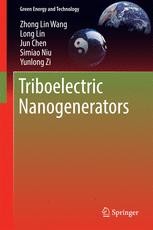 This book introduces an innovative and high-efficiency technology for mechanical energy harvesting. The book covers the history and development of triboelectric nanogenerators, basic structures, working principles, performance characterization, and potential applications. It is divided into three parts: Part A illustrates the fundamental working modes of triboelectric nanogenerators with their prototype structures and theoretical analysis; Part B and Part C introduce two categories of applications, namely self-powered systems and self-powered active sensors.

The book will be an ideal guide to scientists and engineers beginning to study triboelectric nanogenerators or wishing to deepen their knowledge of the field. Readers will be able to place the technical details about this technology in context, and acquire the necessary skills to reproduce the experimental setups for fabrication and measurement.

Prof. Zhong Lin Wang is the Hightower Chair in Materials Science and Engineering and Regents' Professor at Georgia Tech. He is also the chief scientist and director of the Beijing Institute of Nanoenergy and Nanosystems, Chinese Academy of Sciences. His discovery and breakthroughs in developing nanogenerators establish the principle and technological road map for harvesting mechanical energy from environment and biological systems for powering a personal electronics. His research on self-powered nanosystems has inspired the worldwide effort in academia and industry for studying energy for micro-nano-systems, which is now a distinct disciplinary in energy research and future sensor networks. Prof. Wang received 2014 World Technology Prize in Materials; 2014 the James C. McGroddy Prize for New Materials from America Physical Society, 2013 ACS Nano Lectureship award, 2012 Edward Orton Memorial Lecture Award and 2009 Purdy Award from American Ceramic Society, 2011 MRS Medal from the Materials Research Society, 1999 Burton Medal from Microscopy Society of America.

Dr. Long Lin is a postdoctoral fellow at Georgia Institute of Technology. He received his B.S. in Materials Science and Engineering from Tsinghua University, China in 2010 and his Ph.D. from Georgia Tech in 2015 under the supervision of Prof. Zhong Lin Wang. His research interests include synthesis of semiconductor nanomaterials, piezoelectric nanogenerators, triboelectric nanogenerators, self-powered systems, and active sensors. He has co-authored over 60 peer-reviewed journal publications on Nature, Advanced Materials, Nano Letters, Energy & Environmental Science, etc. His work has been cited over 2000 times by scientists in the field of nanomaterials and energy technology. Dr. Lin received the 2013 Materials Research Society Graduate Student Award, and the 2015 Chinese Government Award for Outstanding Students Abroad.

Jun Chen received his B.S. and M.S. in Electrical Engineering from the School of Electronic Information and Communications at Huazhong University of Science and Technology in 2007 and 2010, respectively, and a second M.S. in Biological Engineering from the College of Engineering at The University of Georgia in 2012. He is currently a Ph.D. candidate in the School of Materials Science and Engineering at The Georgia Institute of Technology, working under the supervision of Prof. Zhong Lin Wang. His research focuses primarily on nanomaterial-based energy harvesting, energy storage, active sensing and self-powered micro-/nano-systems. He has already published 58 papers in total and 30 of them as first-author in prestigious scientific journals, such asNature Communications, Advanced Materials, Nano Letters, ACS Nano et al. And still, he filed 8 US patents and 15 Chinese patents. His research on triboelectric nanogenerators has been reported by worldwide mainstream media over 400 times in total, includingNature, PBS, The Wall Street Journal , Washington Times, Scientific American,NewScientist, Phys.org, ScienceDaily, Newsweek, and so on. Jun also received the 2015 Materials Research Society Graduate Student Award, and the 2016 Chinese Government Award for Outstanding Students Abroad. His current H-index is 25.

Simiao Niu is a Ph.D. candidate working as a graduate research assistant in Material Science and Engineering at the Georgia Institute of Technology, under the supervision of Dr. Zhong Lin Wang. He earned his Master of Science degree in the School of Electrical and Computer Engineering at the Georgia Institute of Technology in 2015 and Bachelor of Engineering degree in the Institute of Microelectronics at Tsinghua University in 2011. His doctoral research interests include theoretical and experimental studies on: mechanical energy harvesting by triboelectric nanogenerators and high-performance piezotronic sensors based on piezoelectric nanowires. He has co-authored over 47 peer-reviewed journal publications on Nature, Nature Photonics, Nature Communications, Advanced Materials, Nano Letters, Energy & Environmental Science, etc. Simiao Niu has received the several prestigious awards, including 2015 Material Research Society Graduate Student Silver Award, 2011 Tsinghua University Outstanding Bachelor Thesis Award, 2011 Beijing City and Tsinghua University Outstanding Bachelor Student Award, and 2010 Chinese National Scholarship.

Dr. Yunlong Zi received his Bachelor of Engineering from Department of Materials Science and Engineering at Tsinghua University, Beijing, China, in 2010, and his PhD from Department of Physics at Purdue University, West Lafayette, Indiana, USA, in 2014. He is currently working as a postdoctoral fellow at Georgia Institute of Technology under supervision of Prof. Zhong Lin Wang. His research interests include fundamental physics of triboelectric nanogenerators, hybrid nanogenerator for energy harvesting, self-powered systems, nanoelectronics and synthesis of semiconductor nanomaterials. As the 1st authors, his research have been published in top journals, including Nature Communications, Advanced Materials, Nano Letters and etc. He served as a reviewer over 30 times for high-impact journals such as Advanced Materials, Nano Energy, Advanced Functional Materials, Scientific Reports, and RSC Advances. He was honored as one of “5 students who are transformation makers” by Purdue University in 2013.