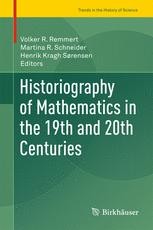 Historiography of Mathematics in the 19th and 20th Centuries

This book addresses the historiography of mathematics as it was practiced during the 19th and 20th centuries by paying special attention to the cultural contexts in which the history of mathematics was written.

During the period from roughly 1880-1940, mathematics modernized in important ways, with regard to its content, its conditions for cultivation, and its identity; and the writing of the history of mathematics played into the last part in particular.

Parallel to the modernization of mathematics, the history of mathematics gradually evolved into a field of research with its own journals, societies and academic positions. Reflecting both

a new professional identity and changes in its primary audience, various shifts of perspective in the way the history of mathematics was and is written can still be observed to this day. Initially concentrating on major internal, universal developments in certain sub-disciplines of mathematics, the field gradually gravitated towards a focus on contexts of knowledge production involving individuals, local practices, problems, communities, and networks.

The goal of this book is to link these disciplinary and methodological changes in the history of mathematics to the broader cultural contexts of its practitioners, namely the historians of mathematics during the period in question.

“This book appears in a series called 'Trends in the History of Science' that is devoted to papers produced in workshops and conferences … . Every practitioner should read this book, as should all those who teach history of mathematics, whether out of avocational interest or because their department compels them to.” (Tom Archibald, ISIS, Vol. 109 (2), June, 2018)

“The editors have compiled eleven articles with the aim of showing ‘through detailed case studies how the historiography of mathematics has been influenced by the contexts and motivations of its practitioners.’ … Each article can be read independently of the rest. … Professional historians and mathematicians with a curiosity about the work of historians will find much of interest here.” (Daniel J. Curtin, MAA Reviews, maa.org, July, 2017)