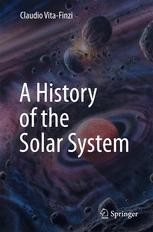 A History of the Solar System

This well illustrated book presents a compact history of the Solar System from its dusty origins 4,600,000 years ago to the present day. Its primary aim is to show how the planets and their satellites, comets, meteors, interplanetary dust, solar radiation and cosmic rays continually interact, sometimes violently, and it reflects humanity's progress in exploring and interpreting this history. The book is intended for a general readership at a time when human and robotic exploration of space is often in the news and should also appeal to students at all levels. It covers the essentials but refers to a large literature which can be accessed via the internet.

Claudio Vita-Finzi was born in Australia and educated in Argentina and the UK, with BA, PhD and ScD degrees from Cambridge University. He has taught Earth and planetary sciences at University College London for many years and is now a Scientific Associate at the Natural History Museum, London. He has been a member of the American Philosophical Society since 1991, received the GK Warren Prize of the US Academy of Sciences in 1994 and was elected a Fellow of the British Academy in 2012. He has published numerous papers on geology and planetary science and several books including Planetary Geology (Terra 2005), The Sun – a User’s Guide (Springer 2008) and Solar History, an Introduction (Springer 2012).

“This slim volume is not just a history of the Solar System but also a history of ideas about the Solar System’s origin and evolution. ... There are ten short, helpfully-titled, chapters so it is an easy book to dip into.” (David A. Rothery, The Observatory, Vol. 137 (1258), June, 2017)

“It's a short and delightful treatment of an interesting topic of the history of the solar system covering it's birth from a cloud of dust and gases, it's youth and how it might still evolve. The book is very detailed and written for a popular audience. … The book's short length makes it ideal as an introduction.” (AstroMadness.com, May, 2017)

“Claudio Vita-Finzi packs in a huge amount of information on our best understanding (c 2016) of how the solar system came into being, the constitution of its components, where it extends to and far more. … there is a huge amount of useful information in this book that would benefit anyone who needed more detail than is available in a typical popular science title.” (Popular Science, popsciencebooks.blogspot.de, April, 2017)

“A History of the Solar System is a timely review of both the observations and the theoretical work the data tests. Vita-Finzi … presents a number of short chapters, each focusing on an important aspect of the development of the solar system as it is now seen. … Chapters contain extensive citations to the research literature, providing readers with opportunities to pursue subjects more deeply. Summing Up: Recommended. Lower- and upper-division undergraduates; faculty; general readers.” (D. E. Hogg, Choice, Vol. 54 (7), March, 2017)

“It’s a collection of analyses of our grand backyard from a variety of perspectives and it offers great value to the reader. … The text is heavily referenced with 20-30 for each of the 8 chapters. A sprinkling of pictures and illustrations amplify its explanations. … Claudio Vita-Finzi’s book ‘A History of the Solar System’ is a great place to get ideas and capture some of excitement of the vivacity of our life.” (Mark Mortimer, Universe Today, universetoday.com, October, 2016)

“Vita-Finzi chooses to talk about the history of some ideas that have come about and developed through the study of our planetary neighbours. Each idea is assigned a chapter followed by a list of references. … the book is cleverly conceived and a useful addition to any scientists bookshelf. It should provide a challenging read to students and graduates alike. Many seasoned scientists may enjoy taking a stab at it too.” (David Edwards, Geoscientist, geolsoc.org.uk, 2016)