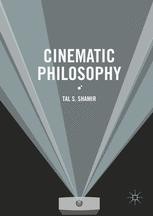 In this book, Tal S. Shamir sets out to identify cinema as a novel medium for philosophy and an important way of manifesting and developing philosophical thought. The volume presents a comprehensive analysis of the nature of philosophy’s potential—or, more strongly put, its need—to be manifested cinematically. Drawing on the fields of cinema, philosophy, and media studies, Cinematic Philosophy adds film to the traditional list of ways through which philosophy can be created, concentrating on the unique potential of the cinematic medium to effectively put forward and create philosophy. In the process, the book opens up innovative horizons for new types of knowledge and wisdom grounded in contemporary contexts and philosophical thought. Philosophy, best characterized as the love of wisdom, is not dependent on a specific medium nor solely situated within written text or oral lectures. Shamir asserts that philosophy can, should, and must be manifested and identified in a range of different platforms.

Tal S. Shamir has directed dozens of films and exhibitions. His awards include a gold medal in the Academy of Motion Picture Arts and Sciences' 2011 Student Oscars. He holds a PhD in cinematic philosophy from the European Graduate School, Switzerland, and is currently working on his first feature film.

“Here is Tal Shamir’s irresistible central thesis: If thought experiments are essential to philosophy, and if some thought experiments are cinematic, visual experiences in motion, then philosophy has always needed cinema and cinema is an irreducible platform for philosophy. In this engaged and generous book, Tal Shamir argues that cinema can be more than a way of illustrating ideas whose home is elsewhere; rather, it is a unique and vital way of doing philosophy. A lively, engaged, and welcome study.” (J.M. Bernstein, Professor of Philosophy, New School for Social Research, USA)

"Shamir's provocative thesis is that philosophy has always needed cinema for its ultimate and most adequate expression, and he makes a quite convincing case for the natural alliance of film and philosophy." (Dan Shaw, Professor of Philosophy and Film, Lock Haven University, USA, and Managing Editor, “Film and Philosophy”)

"Cinematic Philosophy asserts that cinema has always been at the heart of philosophy. With its thorough investigation of the nature of thought experiments—scientific, philosophic, and cinematic—Cinematic Philosophy aims to overturn conventional thinking about the relationship between film and philosophy. Students of both film and philosophy will find much of interest in this innovative study." (Thomas E. Wartenberg, author of “Thinking on Screen”)

“Can we do philosophy cinematically? Tal Shamir’s book boldly grapples with this enduring yet topical question from a novel perspective. Shamir successfully manages to uncover the crucial potential embedded in cinema as a distinctive media platform. This erudite, challenging and masterfully articulated book makes an original and significant contribution to our understanding of post-humanist media theory.” (Jaeho Kang, author of “Walter Benjamin and the Media”, SOAS, University of London, UK)

“Cinesophia is the thinking art of the technological world, an exciting path to wisdom.” (Wolfgang Schirmacher, European Graduate School, Switzerland)

“Cinematic Philosophy is a fascinatingly innovative and stimulating book, resolute in its challenge to the long-held notion that philosophy is inextricably connected only to writing, and oral traditions. Instead, Shamir suggests that art, and especially cinema, is another medium for philosophy, and an important way of manifesting and developing philosophical thought. The author argues that, while writing establishes the reflection of philosophical wisdom, cinema’s potential lies in its ability to manifest the experience of it. Exploring these arguments through conceptual frameworks from cinema and media studies, as well as philosophy, Shamir contends that there is an essential need within philosophy to think cinematically, as cinema can push us towards new concepts, perceptions, and thoughts of the world. Cinematic Philosophy is a highly captivating and invigorating read.” (Vladan Nikolic, filmmaker and Associate Professor of film and media, The New School, USA)

“As an additional dimension (or "platform") to the existing dimensions of oral and written philosophies, which rely upon reflection, Tal Shamir forms a third one – cinematic philosophy, which rests upon philosophical experience. This novel contribution is most interesting and opens up a new area of possibilities for philosophy. Those who are interested in both cinema and philosophy will find this book most inspiring, provocative, and refreshing.” (Amihud Gilead, Professor Emeritus, Department of Philosophy, University of Haifa, Israel)

“Cinema is a process of thought. Tal Shamir’s book, Cinematic Philosophy, connects cinema and philosophy, not as comparative theoretic mediums or textual documents but as integrated process. Cinema is philosophy in action. Drawing from philosophers such as Thomas Wartenberg, J.M. Bernstein, and Daniel Frampton, Shamir exposes cinema as thought, a way of knowing, as the experience of philosophy that leads to wisdom. The implications of Shamir’s excellent exploration is that the philosophical journey does not end with cinema; it is simply a starting point where ‘thought experiments’ is applied to other experiences.” (Murray Stiller, Director, Bosa Centre for Film and Animation, Capilano University, Canada)

“This is a passionate exploration of the fascinating and ambitious thesis that philosophy can be pursued cinematically, by creating and experiencing film, and that philosophy thus pursued promises unique insights. Shamir's excitement about the prospects of a cinematic philosophy of this sort, in an age of rapidly evolving technological means for producing film, is contagious.” (Ariel Meirav, University of Haifa, Israel)