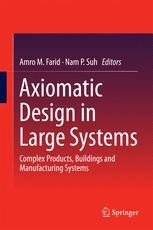 This book provides a synthesis of recent developments in Axiomatic Design theory and its application in large complex systems. Introductory chapters provide concise tutorial materials for graduate students and new practitioners, presenting the fundamentals of Axiomatic Design and relating its key concepts to those of model-based systems engineering. A mathematical exposition of design axioms is also provided.

The main body of the book, which represents a concentrated treatment of several applications, is divided into three parts covering work on: complex products; buildings; and manufacturing systems.

The book shows how design work in these areas can benefit from the scientific and systematic underpinning provided by Axiomatic Design, and in so doing effectively combines the state of the art in design research with practice. All contributions were written by an international group of leading proponents of Axiomatic Design. The book concludes with a call to action motivating further research into the engineering design of large complex systems.

Professor Amro M. Farid received his Sc. B. in 2000 and his Sc. M. 2002 from the MIT Mechanical Engineering Department. He went on to complete his Ph.D. degree at the Institute for Manufacturing within the University of Cambridge (UK) Engineering Department in 2007. He has varied industrial experiences from the automotive, semiconductor, defense, chemical, and manufacturing sectors. He is currently an Associate Professor of Engineering at the Thayer school of Engineering at Dartmouth and leads the Laboratory for Intelligent Integrated Networks of Engineering Systems (LIINES). The laboratory maintains an active research program in Smart Power Grids, Energy-Water Nexus, Transportation-Electrification, and Industrial Energy management. He is also a Research Affiliate at the MIT Mechanical Engineering Department. He has made active contributions to the MIT-Masdar Institute Collaborative Initiative, the MIT Future of the Electricity Grid Study, and the IEEE Vision for Smart Grid Controls. He currently serves on the Executive Committee for the Council of Engineering Systems Universities (CESUN), the Executive Committee for Axiomatic Design, the IEEE Control Systems Society Technical Committee on Smart Grids, the IEEE Systems, Man & Cybernetics Technical Committee on Distributed Intelligent Systems, the IEEE Industrial Electronics Society Technical Committee on Industrial Agents, and the ASME Dynamics Systems & Control Division.

Prof. Nam Suh was the 13th and 14th President of KAIST. During his tenure (2006-2013), the worldwide reputation of KAIST was significantly improved. In 2014, KAIST was the second highest ranked university in Asia. In engineering, its worldwide ranking is around 20.
Doctor Suh has spent most of his professional career at MIT, where he is the Cross Professor Emeritus. He was the Director of the Park Center for Complex Systems, and the Head of the Department of Mechanical Engineering, MIT. In 1984-1988, Doctor Suh was a Presidential Appointee in charge of engineering at the U.S. National Science Foundation (NSF). He was appointed to this position by President Ronald Reagan and confirmed by the U.S. Senate.
He received many awards, including the ASME Medal, the General Pierre Nicolau Award of CIRP, the Pony Chung Award, the Inchon Education Award, the Ho-Am Prize for Engineering, the Mensforth International Gold Medal of IEE (UK), the Hills Millennium Award from IED (UK), and the Distinguished Service Award of NSF. He received nine honorary degrees from universities in four continents. He serves on the boards of universities and industrial firms.
He authored more than 300 papers and seven books (Axiomatic Design Theory, Principles of Design, Tribology, Complexity Theory, Mechanical Behavior of Materials, and Polymer Processing). He holds more than 100 US and ROK patents. His contributions include the delamination theory of wear, the solution wear theory, a theory on the genesis of friction, Axiomatic Design Theory, complexity theory, and microcellular plastics, and innovation theory. He invented the microcellular plastics (MuCell), the On-Line Electric Vehicle (OLEV), and the Mobile Harbor (MH), and many others. He was educated at MIT, CMU, and BB&N.
Show all