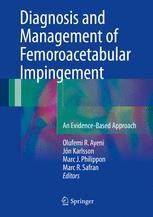 Diagnosis and Management of Femoroacetabular Impingement

This book is unique in combining an exclusive focus on femoroacetabular impingement (FAI) with an evidence-based approach and the involvement of a diverse group of global experts. It is designed to meet the worldwide need for a summary of current evidence that will readily assist the physician in establishing the most accurate diagnosis and providing the best available treatment. The coverage is wide ranging, encompassing clinical examination, differential diagnosis, imaging, indications for surgery, contemporary arthroscopic and open management, treatment of labial tears, cartilage injury management, non-operative management, rehabilitation, treatment of complications, and revision surgery. Trainees, physicians, surgeons, and allied health care professionals who treat young adults with hip pain will find the book to be an excellent source of information on what procedures are most helpful and how they should be implemented.

Olufemi R. Ayeni, MD, FRCSC, is Associate Professor in the Department of Surgery, Faculty of Health Sciences, McMaster University, Hamilton, Ontario, Canada. He is also Director of MacSports, Division of Orthopaedic Surgery, McMaster University and Consulting Physician, Canadian Interuniversity Sport, McMaster University Athletics, Hamilton, Ontario. Dr. Ayeni gained his MD from the University of Ottawa in 2002 and then undertook a residency in Orthopaedic Surgery at McMaster University. He subsequently completed a Sports Medicine and Shoulder Service Fellowship at the Hospital for Special Surgery, Cornell University, New York and a Sports Medicine and Knee Surgery Fellowship at Carleton Sports Medicine Clinic, University of Ottawa. Dr. Ayeni is a reviewer for a number of leading journals in the Orthopaedics and Sports Medicine. His awards include, in 2010, a Professional Development Grant from the Royal College of Physicians and Surgeons of Canada in respect of work on "Femoroacetabular Impingement and Hip Disorders in the Young Adult" and a Travelling Fellowship from the Canadian Academy of Sports and Exercise Medicine. He is lead or co-author of over 50 peer-reviewed journal articles as well as several book chapters.

Jon Karlsson, MD, PhD, has been Academic Head at the Orthopaedic Department, Sahlgrenska Academy, University of Gothenburg, Sweden, since 2001. Dr. Karlsson graduated from the medical school in Reykjavik, Iceland, in 1978. He defended his PhD thesis at Gothenburg University in 1989 and was appointed Associate Professor in 1990. In 1991 he became a Senior Consultant in the Orthopaedic Department of Sahlgrenska University Hospital, serving as Clinical Head from 1997 to 2001. He was appointed Professor of Orthopaedics and Sports Traumatology in 1998. Dr. Karlsson served as President of the Swedish Association of Sports Medicine, 1999-2001. Since

2008 he has been Editor-in-Chief of KSSTA (Knee Surgery Sports Traumatology Arthroscopy), the official journal of ESSKA. He was program chairman of the biannual ESSKA congress in 2006, 2008, and 2010. Dr. Karlsson has been a member of the ISAKOS Board since 2005 and is currently secretary of the ISAKOS Executive Board of Directors. He is the author of more than 300 peer-reviewed papers and 26 books in Orthopaedics and Sports Traumatology, as well as several book chapters.

Marc J. Philippon, MD is a specialist in Sports Medicine and Hip Disorders and managing partner at the Steadman Clinic. He is known as one of the top orthopaedic surgeons in the world. Before joining the Steadman Clinic in 2005, Dr. Philippon was Director of Sports Medicine/Hip Disorders at the University of Pittsburgh Medical Center (UPMC). Dr. Philippon is internationally known for his joint preservation techniques and in 2012 received an Achievement Award from the American Academy of Orthopedic Surgeons. He has successfully treated almost 1000 professional and Olympic athletes who returned to their sports, performing at high levels. Dr. Philippon is a founding member of the International Society of Hip Arthroscopy (ISHA) and a fellow with the American Academy of Orthopedic Surgeons.

Marc Raymond Safran, MD, is Associate Chief of Sports Medicine and Fellowship Director of Sports Medicine, and Professor of Orthopaedic Surgery, at Stanford University, California. He specializes in Sports Medicine and arthroscopic and ligament reconstructive surgery on the knee, shoulder, elbow, and hip. Dr. Safran is a diplomate of the American Board of Orthopaedic Surgery and a member of various prestigious societies. He has recently been elected to the presidential line for ISAKOS (president 2017–2019) and ISHA (president 2015–2016).  Dr. Safran has served as a team physician for many collegiate teams since 1993 and has been Chief Orthopaedic Consultant to the Women’s Professional Tennis Association and a consultant to the NBA Players Association and NHL Players Association.