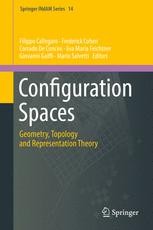 This book collects the scientific contributions of a group of leading experts who took part in the INdAM Meeting held in Cortona in September 2014. With combinatorial techniques as the central theme, it focuses on recent developments in configuration spaces from various perspectives. It also discusses their applications in areas ranging from representation theory, toric geometry and geometric group theory to applied algebraic topology.

Filippo Callegaro was born in 1980. He received a PhD in Mathematics from Scuola Normale Superiore of Pisa under the direction of Mario Salvetti in 2007.  In 2008 he was offered a research position at the Scuola Normale. In 2013 he switched to the University of Pisa, where his work focuses on the topology of configuration spaces, cohomology of braid groups and generalizations, hyperplane and toric arrangements.

Frederick R. Cohen was born in 1945. He received a PhD in Mathematics from the University of Chicago under the direction of Peter May. He has been a professor of Mathematics at the University of Rochester since 1988. He has been a visiting scholar at the Institute for Advanced Studies, the Institute for Mathematics and its Applications and the Centro di Ricerca Matematica Ennio De Giorgi, as well as the University of Pennsylvania, MIT, and Stanford. He has served on the editorial boards of Algebraic and Geometric Topology, Forum Mathematicum, and the Journal of Homotopy Theory and Related Structures. He has worked in homotopy theory, the topology of configuration spaces, the cohomology and related properties of braid groups on surfaces, and toric topology, as well as applied problem concerning sensor counting and robotic motion.

Corrado De Concini was born in 1949. He received a Ph.D. in Mathematics from the University of Warwick under the direction of George Lusztig in 1975. He has been a Professor of Mathematics since 1983. Since 1996 he has been a professor at the University of Roma, La Sapienza. He has been a visiting scholar at Brandeis University, Mittag Leffler Institute, Tata Institute of Fundamental Research, Harvard University, MIT, Université de Paris VI, IHES, MSRI, and the École Normale Supérieure of Paris. He serves on the editorial boards of Rendiconti Accademia Nazionale dei Lincei, Journal of Transformation Groups, IMRN, Rendiconti di Matematica, Rendiconti del Seminario Matematico-Padova, and Communications in Contemporary Mathematics. He was a plenary speaker for the European Congress of Mathematics (Paris) in 1992. He has made important contributions to several areas of algebra and algebraic geometry, e.g. invariant theory, commutative algebra, algebraic and quantic group theory, the Schottky problem, and hyperplane arrangements.

Eva-Maria Feichtner was born in 1972. She received a PhD in mathematics from TU Berlin in 1997. After postdoctoral appointments at MIT and at the Institute for Advanced Studies, she was an assistant professor at ETH Zurich and was awarded a research professorship from the Swiss National Science Foundation. In 2006 she was appointed professor of topology at the University of Stuttgart; since 2007 she has served as a professor of algebra at the University of Bremen, where she co-directs the Institute for Algebra, Geometry, Topology and their Applications (ALTA). She has been a visiting scholar at many research institutions, notably at MSRI, Berkeley, as research professor and as program organizer. Her research interests lie in the interplay of algebra, geometry, topology and combinatorics, notably in arrangements of hyperplanes, toric varieties and tropical geometry. She serves on the editorial board of Advances in Applied Mathematics.

Giovanni Gaiffi was born in 1970. He received his degree in Mathematics from the University of Pisa in 1993 and attended the Scuola Normale, where he also completed his PhD in Mathematics under the direction of Corrado De Concini in 1999. In 1997 he was offered a research position at the Scuola Normale, before switching to the University of Pisa as an associate professor in 2005. His field of interest mainly concerns algebra, in particular Lie theory, representation theory, and their interplay with combinatorics and algebraic topology. He has organized international conferences and is co-author of the educational book ‘Giochi e Percorsi Matematici’ released by Springer-Italia.

Mario Salvetti was born in 1957. He received a degree in Mathematics from the University of Pisa and was a “perfezionando” at the Scuola Normale in Pisa. He has been a Professor of Mathematics since 1992, and in Pisa since 2000. He has been a visiting scholar at Columbia University, Moscow State University (at the “Gelfand Seminar”), Graduate School of Mathematical Sciences in Tokyo, and MSRI. He has served on the organizing and scientific committees of international conferences and meetings in Italy, and edited a number of books. He organized a mini-symposium on “Braids” at the European Congress of Mathematics in Cracow in 2012. He has worked in the topology and combinatorics of hyperplane arrangements, braid groups and Artin groups, Coxeter groups, configuration spaces, and to some extent in the applied topology related to image understanding.