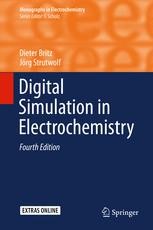 This book explains how the partial differential equations (pdes) in electroanalytical chemistry can be solved numerically. It guides the reader through the topic in a very didactic way, by first introducing and discussing the basic equations along with some model systems as test cases systematically. Then it outlines basic numerical approximations for derivatives and techniques for the numerical solution of ordinary differential equations. Finally, more complicated methods for approaching the pdes are derived.

The authors describe major implicit methods in detail and show how to handle homogeneous chemical reactions, even including coupled and nonlinear cases. On this basis, more advanced techniques are briefly sketched and some of the commercially available programs are discussed. In this way the reader is systematically guided and can learn the tools for approaching his own electrochemical simulation problems.

This new fourth edition has been carefully revised, updated and extended compared to the previous edition (Lecture Notes in Physics Vol. 666). It contains new material describing migration effects, as well as arrays of ultramicroelectrodes. It is thus the most comprehensive and didactic introduction to the topic of electrochemical simulation.

Dieter Britz, Ph.D. (Sydney Univ. 1967), Dipl. Comp. Sci. (University of Newcastle, Australia, 1985), Dr. scient (Aarhus Univ., Denmark, 2007).
Dr. Britz has gathered longstanding experience in electrochemistry during research stays all over the world: he worked at the CSIRO, Sydney, on corrosion problems, on inorganic ion exchangers at the University of New York at Buffalo (1967-68), he performed instrumental work at the University of Kentucky, Lexington, USA (1968-70), investigated corrosion and electrosynthesis at the Nuclear Research Centre in Jülich, Germany (1970-75), and performed data analysis of turbulence signals at Newcastle University, Australia (1975-78). In 1978 he accepted the position of Assoc. Professor at Aarhus University in Denmark, from which he retired as Emeritus Assoc. Professor in 2001. In Aarhus, he has worked on a number of projects, focusing on corrosion, electroanalysis and digital simulation.

Jörg Strutwolf received the Diploma and Ph.D. degrees in the Theoretical Chemistry Group, University of Bielefeld, Germany. He has specialized in the investigation of interfacial transport processes by theoretical and experimental methods. His current research interests include the dynamics and reactivity of soft interfaces, the combination of microfluidics and electrochemistry, numerical modelling of transport and reaction phenomena in electrochemistry (mainly in co-operation with Dieter Britz), electrochemistry at the nanoscale, and nanostructuring of interfaces for sensor application. Currently, he is a Visiting Scientist at the University of Tübingen, Germany. He has worked in numerous electrochemistry groups, e.g. at University College London, U.K., University of Warwick, Coventry, U.K., Universitat Rovira i Virgili, Tarragona, Spain, and Tyndall National Institute, Cork, Ireland.