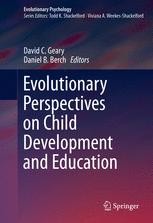 This stimulating volume assembles leading scholars to address issues in children’s cognitive, academic, and social development through the lens of evolutionary psychology.Debates and controversies in the field highlight the potential value of this understanding, from basic early learning skills through emerging social relationships in adolescence, with implications for academic outcomes, curriculum development, and education policy.Children’s evolved tendency toward play and exploration fuels an extended discussion on child- versus adult-directed learning, evolutionary bases are examined for young learners’ moral development, and contemporary theories of learning and memory are viewed from an  evolutionary perspective.Along the way, contributors’ recommendations illustrate real-world uses of evolution-based learning interventions during key developmental years.

David C. Geary is currently a Curators’ Professor in the Department of Psychological Sciences and the Interdisciplinary Neuroscience Program at the University of Missouri. His work spans a broad range of topics from children’s mathematical cognition and development to the evolution of sex differences. He’s written four sole authored books, Children’s Mathematical Development (1994), Male, Female (1998, 2nd edition, 2010), Origin of Mind (2005), and Evolution of Vulnerability (2015), one co-authored book, Sex Differences (2008), and is co-editing a five volume series on Mathematical Cognition and Learning, the first two volumes of which have been released; Evolutionary Origins and Early Development of Number Processing (2015) and  Development of mathematical cognition: Neural substrates and genetic influences (2016). In addition, he has published about 250 journal articles and chapters and has had extensive funding from the National Institutes of Health and the National Science Foundation for his empirical research. He served on the President’s National Mathematics Advisory Panel from 2006 to 2008 and chaired the learning processes task group, and was appointed by President Bush to the National Board of Advisors for the Institute of Education Sciences, U.S. Department of Education (2007 to 2010). Geary is a fellow of the American Association for the Advancement of Science, received a MERIT Award from the National Institutes of Health, is a co-recipient of the G. A. Miller Award from the American Psychological Association, and has been a visiting scholar at the Chinese University of Hong Kong, and the Institute of Advanced Study, Durham University.

Daniel B. Berch is Professor of Educational Psychology and Applied Developmental Science at the University of Virginia’s Curry School of Education. Prior to this position, he was Associate Dean for Research and Faculty Development at the Curry School, and before that served as Associate Chief of the Child Development and Behavior Branch at the National Institute of Child Health and Human Development, NIH. His previous federal service included a stint as Senior Research Associate at the U. S. Department of Education, advising the Assistant Secretary for Educational Research and Improvement. Berch has published journal articles and book chapters on the development of numerical cognition, mathematical learning disabilities, and evolutionary perspectives on education. He is senior editor of the book, Why is Math So Hard for Some Children?, and senior editor of the five-volume Mathematical Cognition and Learning series. He is also the lead founder of the international Mathematical Cognition and Learning Society. Among other honors, Berch received the NIH Award of Merit, was elected Fellow of the American Psychological Association’s Division of Experimental Psychology, served as an ex officio member of the U.S. Department of Education’s National Mathematics Advisory Panel commissioned by President George W. Bush, and was elected to the Evolution Institute’s Scientific Advisory Board (and chairs its Education Subcommittee). He is co-author (with David Geary) of an article entitled “Evolutionary Approaches to Understanding Children’s Academic Achievement” published in Wiley’s online reference work, Emerging Trends in the Social and Behavioral Sciences.