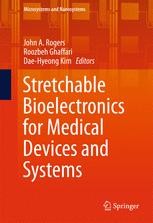 This book highlights recent advances in soft and stretchable biointegrated electronics. A renowned group of authors address key ideas in the materials, processes, mechanics, and devices of soft and stretchable electronics; the wearable electronics systems; and bioinspired and implantable biomedical electronics. Among the topics discussed are liquid metals, stretchable and flexible energy sources, skin-like devices, in vitro neural recording, and more.
Special focus is given to recent advances in extremely soft and stretchable bio-inspired electronics with real-world clinical studies that validate the technology. Foundational theoretical and experimental aspects are also covered in relation to the design and application of these biointegrated electronics systems. This is an ideal book for researchers, engineers, and industry professionals involved in developing healthcare devices, medical tools and related instruments relevant to various clinical practices.

Professor John A. Rogers is currently Swanlund Chair Professor at University of Illinois at Urbana/Champaign, with a primary appointment in the Department of Materials Science and Engineering, and joint appointments in several other departments, including Bioengineering.  He is Director of the Seitz Materials Research Laboratory. Rogers’ research includes fundamental and applied aspects of materials for unusual electronic and photonic devices, with an emphasis on bio-integrated devices and bio-inspired designs.  He has published more than 550 papers and is inventor on over 80 patents, more than 50 of which are licensed or in active use to various startups and large companies. His research has been recognized with many awards, including a MacArthur Fellowship in 2009, the Lemelson-MIT Prize in 2011, the MRS Mid-Career Researcher Award and the Robert Henry Thurston Award (American Society of Mechanical Engineers) in 2013, the 2013 Smithsonian Award for Ingenuity in the Physical Sciences and the 2014 Eringen Medal of the Society for Engineering Science. He received an Honoris Causa Doctorate from the École Polytechnique Fédérale de Lausanne (EPFL) in 2013.
Dr. Roozbeh Ghaffari is co-Founder and Chief Technology Officer at MC10 Inc. In this role, Roozbeh has shaped the technology vision of the company, and is responsible for defining and developing emerging products from concept phase through clinical validation. These efforts have led to the development and launch of the BioStamp® and “tattoo-like" electronics as the foundation of MC10's wearable computing platforms. Roozbeh is a founding editor of the MIT Entrepreneurship Review and is a research staff member of the MIT Research Laboratory of Electronics. Roozbeh’s contributions in soft bioelectronics, micro/nano-scale systems, and auditory neuroscience research have been recognized with the MIT Helen Carr Peake PhD Research Prize, the MIT100K Grand Prize, the Harvard Business School Social Enterprise Grand Prize, and the MIT Technology Review Magazine’s Top 35 Innovators Under 35. Roozbeh has published over 40 academic papers and is inventor on over 40 patent applications and awards.
Professor Dae-Hyeong Kim is currently an associate professor in the School of Chemical and Biological Engineering of Seoul National University. His research aims to develop technologies for high performance flexible and stretchable electronic devices using high quality single crystal inorganic materials and novel biocompatible materials that enable a new generation of implantable biomedical systems with novel capabilities and increased performance. He has published more than 70 papers (including Science, Nature Materials, Nature Neuroscience, Nature Nanotechnology, Nature Communications, and PNAS), 30 international and domestic patents and 4 book chapters. He has been recognized with several awards including George Smith Award (2009) from the IEEE Electron Device Society, MRS Graduate Student Award (Gold Medal, 2009), Green Photonics Award from SPIE (2011), TR 35 award from MIT’s Technology Review magazine (2011), and Hong Jin-ki Creative Award (2015).