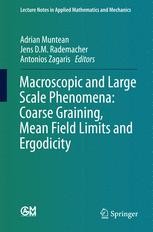 phenomena: coarse graining, mean field limits and ergodicity”, which was held in 2012 at the University of Twente, the Netherlands. The focus lies on mathematically rigorous methods for multiscale problems of physical origins.

Each of the four book chapters is based on a set of lectures delivered at the school, yet all authors have expanded and refined their contributions.

Francois Golse delivers a chapter on the dynamics of large particle systems in the mean field limit and surveys the most significant tools and methods to establish such limits with mathematical rigor. Golse discusses in depth a variety of examples, including Vlasov--Poisson and Vlasov--Maxwell systems.

Lucia Scardia focuses on the rigorous derivation of macroscopic models using $\Gamma$-convergence, a more recent variational method, which has proved very powerful for problems in material science. Scardia illustrates this by various basic examples and a more advanced case study from dislocation theory.

Alexander Mielke's contribution focuses on the multiscale modeling and rigorous analysis of generalized gradient systems through the new concept of evolutionary $\Gamma$-convergence. Numerous evocative examples are given, e.g., relating to periodic homogenization and the passage from viscous to dry friction.