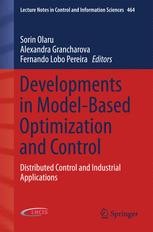 Developments in Model-Based Optimization and Control

This book deals with optimization methods as tools for decision making and control in the presence of model uncertainty. It is oriented to the use of these tools in engineering, specifically in automatic control design with all its components: analysis of dynamical systems, identification problems, and feedback control design.

Developments in Model-Based Optimization and Control takes advantage of optimization-based formulations for such classical feedback design objectives as stability, performance and feasibility, afforded by the established body of results and methodologies constituting optimal control theory. It makes particular use of the popular formulation known as predictive control or receding-horizon optimization.

The individual contributions in this volume are wide-ranging in subject matter but coordinated within a five-part structure covering material on:

· optimization-based analysis and design; and

Developments in Model-Based Optimization and Control is a selection of contributions expanded and updated from the Optimisation-based Control and Estimation workshops held in November 2013 and November 2014. It forms a useful resource for academic researchers and graduate students interested in the state of the art in predictive control. Control engineers working in model-based optimization and control, particularly in its bioprocess applications will also find this collection instructive.

Sorin Olaru is a Professor in the Automatic Control Department of CentraleSupelec, member of the CNRS Laboratory of Signals and Systems and associate researcher in the INRIA team DISCO, all institutions being located in the Saclay region in France. He received the PhD from Paris XI University in 2005, the PhD from University Politehnica in Bucharest in 2010 and the French Habilitation à diriger des recherches in 2011, being also the recipient of the European Commission’s Archimedes Prize in 2002. His research interests are encompassing the optimization-based control design and set-theoretic characterization of constrained dynamical systems as well as the numerical methods in optimization and control. He is involved in research projects related to network control systems with results on fault tolerant control and control of systems affected by delays and held visiting appointments at NTNU Trondheim (Norway), CSDC Newcastle (Australia), Bernoulli Center in Lausanne (Swiss) and Linnaeus Center in Lund (Sweden). S. Olaru has a record of 12 PhD, 8 MSc and 2 postdoctoral researchers supervised or co-supervised and he taught master and doctoral level courses on constrained control, predictive control and hybrid systems. He is a Senior member of IEEE, member of IFAC Technical Committee on Robust Control, member of the IEEE CSS Technical Committee on Hybrid Systems, former coordinator of the French research group on Non-linear Model Predictive Control (2006-2011), IPC Member for 9 International Conferences, Associate Editor for IMA Journal of Mathematical Control and Information, coordinator of 6 international cooperative research projects and participant in 3 European research projects (1 as coordinator and 2 as national representative and principal investigator). He co-authored 1 monograph (F. Stoican and S. Olaru, Set-Theoretic Fault Tolerant Control in Multisensor Systems. ISTE – Hermes, John Wiley & sons, 2013), 20 book chapters, 35 journal publications, 120 conference papers.
Alexandra Grancharova is Associate Professor at the University of Chemical Technology and Metallurgy (UCTM) in Sofia, Bulgaria. She has published two textbooks at UCTM (Model-based Control and Optimal and Robust Systems), which cover the material of identical M.Sc. courses at UCTM and one Springer monograph (A. Grancharova and T. A. Johansen, Explicit Nonlinear Model Predictive Control: Theory and Applications, Lecture Notes in Control and Information Sciences, vol.429). Beside that, Grancharova has published 9 book chapters, 18 articles in prestigious international journals and more than 60 peer-reviewed papers in the proceedings of international conferences. In 2000, she received the Bulgarian Academy of Sciences “Marin Drinov” award for young scientists. She is a member of the editorial board of the Automatics and Informatics journal (in Bulgarian), published by the John Atanasoff Society of Automatics and Informatics. Grancharova is a member of the IFAC Technical Committee on Control Design and an IPC member of several international conferences (Simultech 2011, 2012; IFAC NMPC 2012; Automatics and Informatics 2007 – 2014). She has been the coordinator of two international projects and has participated in several EU funded research projects (from 2000 to 2003 she held a postdoctoral position at the Department of Engineering Cybernetics at the Norwegian University of Science and Technology, Trondheim, Norway, under the EU Research Training Network - MAC).
Fernando Manuel Ferreira Lobo Pereira is Full Professor in Control and Automation at the Electrical and Computer Engineering Department, Faculty of Engineering of Porto University, and scientific coordinator of the SYSTEC Research Unit (ex- Institute for Systems and Robotics – Porto where he led the Network Centric Control Systems group). He received the PhD in Control Theory from Imperial College of Science and Technology, London University, in 1986, and the Habilitation degree from Porto University in 1997. He is a member of IEEE, SIAM, APCA, AMS, INFORMS, SPM, and OE. His research work falls in the following areas: Control Theory (Non-smooth Analysis, Dynamic Optimization, Impulsive Control), Hybrid Systems, and Coordinated Control, and their application in the control of autonomous and/or networked systems arising mainly in unmanned vehicle systems. He has been involved in a large number of European and national research problems and has been expert adviser of EU to follow up funded research projects and evaluator of EU R&D proposals. He participated in ca 180 international technical scientific meetings, in the organization or the IPC of several international workshops, and many international conferences. He is in the editorial board of the journal Mathematical Problems in Engineering and has been regularly reviewing scientific and technical articles for conferences and journals such as Automatica, SIAM J. control and Optimization, IEEE J. Robotics & Autom., Systems and Control Letters, Math. of Industrial Systems, Annals of Operations Res., IEEE Robotics and Autom. Mag., Int. J. of Intelligent Control & Systems. Besides numerous technical reports he authored more than 250 scrutinized scientific and technical papers (of which 48 in journals) in reputed peer-reviewed international publications.