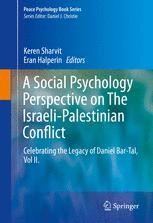 A Social Psychology Perspective on The Israeli-Palestinian Conflict

Opening with an introduction to the Israeli-Palestinian conflict situation and a few chapters on the theoretical backgrounds of the creation of a societal ethos of conflict, the volume then moves to an analysis of the psycho-social underpinnings of the conflict, while concluding with a discussion of the possibility of long-standing peace in the region. Among the topics included in the coverage are:

·         The Israeli and Palestinian ethos of conflict

·         The important role of Palestinian and Israeli education

·         An analysis of the leadership in the Israeli-Palestinian peace process