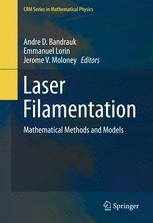 This book is focused on the nonlinear theoretical and mathematical problems associated with ultrafast intense laser pulse propagation in gases and in particular, in air. With the aim of understanding the physics of filamentation in gases, solids, the atmosphere, and even biological tissue, specialists in nonlinear optics and filamentation from both physics and mathematics attempt to rigorously derive and analyze relevant non-perturbative models. Modern laser technology allows the generation of ultrafast (few cycle) laser pulses, with intensities exceeding the internal electric field in atoms and molecules (E=5x109 V/cm or intensity I = 3.5 x 1016 Watts/cm2 ). The interaction of such pulses with atoms and molecules leads to new, highly nonlinear nonperturbative regimes, where new physical phenomena, such as High Harmonic Generation (HHG), occur, and from which the shortest (attosecond - the natural time scale of the electron) pulses have been created. One of the major experimental discoveries in this nonlinear nonperturbative regime, Laser Pulse Filamentation, was observed by Mourou and Braun in 1995, as the propagation of pulses over large distances with narrow and intense cones. This observation has led to intensive investigation in physics and applied mathematics of new effects such as self-transformation of these pulses into white light, intensity clamping, and multiple filamentation, as well as to potential applications to wave guide writing, atmospheric remote sensing, lightning guiding, and military long-range weapons.

The increasing power of high performance computers and the mathematical modelling and simulation of photonic systems has enabled many new areas of research. With contributions by theorists and mathematicians, supplemented by active experimentalists who are experts in the field of nonlinear laser molecule interaction and propagation, Laser Filamentation sheds new light on scientific and industrial applications of modern lasers.