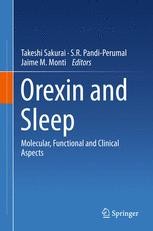 Takeshi Sakurai is a professor in the Department of Molecular Neuroscience and Integrative Physiology, Faculty of Medicine, Kanazawa University (Japan). He obtained his M.D. and Ph.D. from the University of Tsukuba and received his postdoctoral training at the Howard Hughes Medical Institute at the University of Texas Southwestern Medical Center, Dallas, USA. The goal of his work is to identify novel neuropeptides and define their physiological roles. He is especially interested in neuropeptides involved in homeostatic processes and innate behaviors such as feeding, autonomic function, emotion, and sleep and wakefulness states. In recent years, he has focused on identifying the input and output systems of orexin neurons to reveal the neuronal network that plays an important role in regulating  sleep and wakefulness states.

Pandi-Perumal is the President and Chief Executive Officer of Somnogen Canada Inc, a Canadian Corporation. He is a well-recognized sleep researcher both nationally and internationally, and has authored many publications. His general area of research interest includes sleep and biological rhythms. He is a well-known editor in the field of sleep medicine and has edited over 20 volumes dealing with various sleep-related topics. He had an honorable mention in the New York Times in 2004. India International Friendship Society awarded 'Bharat Gaurav award' on January 12, 2013.

Jaime M. Monti has obtained his MD from Uruguay and subsequently he had his early career trainings at Stanford University and National Institutes of Mental Health. He is a member of the International College of Neuropsychopharmacology, the Sleep Research Society (USA), the European Sleep Research Society, and the Argentinian Society of Sleep Medicine. Contributed

and served at various capacities in these societies. He has published over 150 peer-reviewed scientific papers and he has edited several volumes related to sleep. Over the years, he has won several prestigious awards for his research, including the Claude Bernard Award (Clinical Sleep Research) from the Government of France, and the Schering Award for Basic Sleep Research, in Germany.
Show all
Reviews

“This is an up-to-date look at these hypothalamic neuropeptides and how we have come to understand their wide range of neuroregulatory roles. … This is highly technical book that reviews in detail the research that has led to the discovery and understanding of the orexin neuropeptides and their role in a wide range of neuromodulatory systems. … provide some insights into how manipulation of this system may result in therapeutic interventions for a number of neurological and psychiatric conditions.” (Michael Easton, Doody’s Book Reviews, February, 2016)