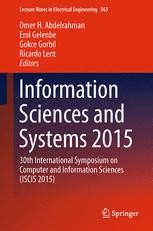 The 30th Anniversary of the ISCIS (International Symposium on Computer and Information Sciences) series of conferences, started by Professor Erol Gelenbe at Bilkent University, Turkey, in 1986, will be held at Imperial College London on September 22-24, 2015. The preceding two ISCIS conferences were held in Krakow, Poland in 2014, and in Paris, France, in 2013.

The Proceedings of ISCIS 2015 published by Springer brings together rigorously reviewed contributions from leading international experts. It explores new areas of research and technological development in computer science, computer engineering, and information technology, and presents new applications in fast changing fields such as information science, computer science and bioinformatics.

The topics covered include (but are not limited to) advances in networking technologies, software defined networks, distributed systems and the cloud, security in the Internet of Things, sensor systems, and machine learning and large data sets.

Dr. O.H. Abdelrahman holds the MSc and PhD from Imperial College London, where he is currently a Research Fellow in the Intelligent Systems and Networks Group in the Department of Electrical and Electronic Engineering. His research interests include network security, network quality of service and performance, and the performance analysis of computer systems and networks.
He has published on these topics extensively in journals such as the Physical Review, IEEE Network, The Computer Journal, the IEEE Transactions on Emerging Topics in Computing and other conferences and journals. He is currently active in EU and EPSRC projects, and is administering the EU FP7 NEMESYS project on Mobile Network Security that includes several industry partners such as Telecom Italia IT, COSMOTE, Hispasec, with other industry and academic partners.

Prof E. Gelenbe is a Fellow of ACM and IEEE and is Head of the Intelligent Systems and Networks Group at Imperial College, which was ranked by the recent UK Research Excellence Framework (REF) 2014 as the group within Imperial's Electrical and Electronic Engineering (EEE) Department with the larges proportion of world leading research outputs. Imperial's EEE Dept. was in turn ranked first nationally by REF 2014 for its research outputs. An expert on performance modeling of computer systems and networks, Prof Gelenbe has some 160 articles in the leading journals of computer science, electrical engineering, bioinformatics and physics, and is currently working on energy optimisation for computer systems and networks and on the security of networks. He is an elected member of the Royal Academy of Belgium, the Science Academies of Hungary, Poland and Turkey, and of the French National Academy of Technologies.

Dr G. Gorbil received his PhD from Imperial College London, where he is currently a Research Fellow in the Intelligent Systems and Networks Group in the Department of Electrical and Electronic Engineering. His research interests include system simulation and measurement, cyber-physical systems and their security and resilience, network security and Cloud Computing.  He has published on these topics extensively in IEEE journals and many international conferences. Active in a series of EU and EPSRC projects, including SATURN, DIESIS and NEMESYS, he currently plays a leading role in the EU FP7 PANACEA project on Cloud Computing, collaborating with IBM, ATOS and other companies, and also works on the EU FP7 Project NEMESYS on Mobile Network Security for which he has developed a highly detailed attack and security simulation system.

Dr R. Lent is an Assistant Professor at the University of Houston, and has previously been a Research Fellow at Imperial College London. He received his PhD in Computer Science from the University of Central Florida where he was also a Visiting Assistant Professor. At Imperial, he has had an active role in several EU and EPSRC research projects such as CASCADAS, Self-Aware Networks and Quality of Service, SATURN and DIESIS, and was active in the design and implementation of the Cognitive Packet Network, one of the world's first autonomic communication systems. He also has strong interests in the interaction between energy consumption and network security. Dr Lent has published extensively in IEEE journals and conferences, and in other journals, on these subjects, and his teaching includes a variety of topics in computer science and engineering.