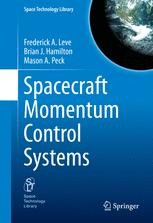 The goal of this book is to serve both as a practical technical reference and a resource for gaining a fuller understanding of the state of the art of spacecraft momentum control systems, specifically looking at control moment gyroscopes (CMGs). As a result, the subject matter includes theory, technology, and systems engineering. The authors combine material on system-level architecture of spacecraft that feature momentum-control systems with material about the momentum-control hardware and software. This also encompasses material on the theoretical and algorithmic approaches to the control of space vehicles with CMGs. In essence, CMGs are the attitude-control actuators that make contemporary highly agile spacecraft possible. The rise of commercial Earth imaging, the advances in privately built spacecraft (including small satellites), and the growing popularity of the subject matter in academic circles over the past decade argues that now is the time for an in-depth treatment of the topic. CMGs are augmented by reaction wheels and related algorithms for steering all such actuators, which together comprise the field of spacecraft momentum control systems. The material is presented at a level suitable for practicing engineers and those with an undergraduate degree in mechanical, electrical, and/or aerospace engineering.

Frederick A. Leve Research Aerospace Engineer at the Air Force Research Laboratory, Space Vehicles Directorate, received his Ph.D. in Aerospace Engineering from the University of Florida in 2010. While at the University of Florida, he received the IAF Silver Hermann Oberth Medal and the AIAA Abe Zarem Award for Astronautics. Currently, he is the technical advisor to the Guidance, Navigation, and Controls Group and has published many papers in the area of attitude dynamics and control, specifically with respect to momentum control systems and also performs research in under-actuated control, fault tolerant control, control allocation, analytical mechanics, and system identification. Dr. Leve is a recipient of the 2014 AFRL Early Career Award.

Brian J. Hamilton Engineering Fellow at Honeywell Aerospace, received a BSEE with Honors from the University of Illinois, 1976.Mr. Hamilton has nearly 40 years of experience at Honeywell (formerly, Sperry) and has participated in the development  of CMG technology since its infancy. In recent years, his research focus has been on CMG array control and steering, and the general application of momentum systems to agile spacecraft attitude control. Other areas of specialty include nonlinear modeling, controls design, system optimization and active magnetic suspension. Mr. Hamilton holds 12 patents.

Associate Professor at Cornell University in Mechanical and Aerospace Engineering, received his Ph.D. in Aerospace Engineering from the University of California, Los Angeles, in 2001. He has worked as an aerospace engineer since 1994 and has been on the faculty at Cornell since 2004. From late 2011 through early 2014 he was NASA’s Chief Technologist. In that role, he served as the agency’s chief strategist for technology investment and prioritization and advocate for innovation in aeronautics and space technology.
His research lab focuses on fundamental research in space technology that can be advanced through flight experiments. Examples include Violet, a nanosatellite for demonstrating CMG steering laws, and KickSat,
the world’s first crowdfunded spacecraft. Dr. Peck holds 19 patents in the U.S. and the E.U. and has over 100 academic publications. He received  the NASA Distinguished Public Service Medal in 2014.
Show all